Nike NFL Uniforms To Be 'Aggressive', Could Seattle Seahawks Be Included?

Share All sharing options for: Nike NFL Uniforms To Be 'Aggressive', Could Seattle Seahawks Be Included?

CNBC's Darren Rovell was at Nike headquarters on Tuesday and uniform changes were on the docket. Nike has the rights to NFL uniforms and is ready to put its stamp on the apparel, as soon as football gets back underway. While it's still up to the individual teams, Nike is always prepared to push the envelope, coming up with new and creative uniform ideas that tend to be of a polarizing nature. The Oregon Ducks have about a billion different uniforms, with different colors, designs and all sorts of fancy mock-ups. And, of course, there's the Nike Pro Combat line, featuring "cutting-edge" uniforms in design and features.

Here's the quote of choice, from Nike president Charlie Denson.

"We're going to be aggressive," Denson said. "Some teams are willing to go further than others."

Immediately, one has to wonder if the Seahawks are one of those teams will to go farther. After all, this is the team that decided to go with these uniforms under Reebok's direction. 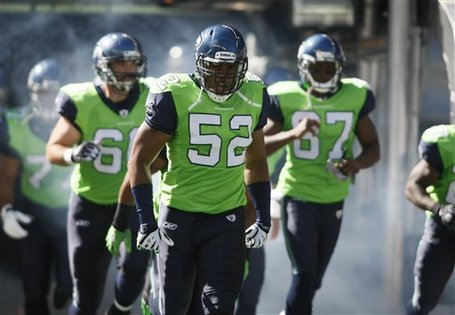 Now imagine these colors with Nike's spin and, well, you get the picture. Instead of the boring all-blues and uniforms that just aren't flashy, Seattle could go with an extreme change of direction, if not a simple re-branding.

Of course, if these means the Seahawks finally wear retro uniforms, including silver helmets, then I'm all for it. Perhaps it is time for a change.