The NFL Lockout entered it's 96th day today and no resolution has been reached. The last couple of days have been exciting in that the NFL ownership and player representatives had been sequestered away in a secret spot somewhere hopefully putting the new CBA stipulations down in writing so each side's lawyers can get to squabbling over the little details.

I "explained" the situation in much greater detail last night, but essentially, because there is a gag order in place the only updates that we receive are rumors and rumblings from unsubstantiated sources. Did you ever play 'telephone' as a kid? Or as an adult? Here is an artist's rendering of the typical NFL fan at the moment. 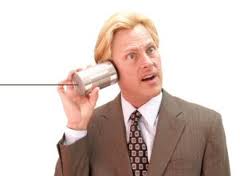 Basically, that's what this whole thing has come down to.

What may start out from the 'inside source' as "I'm 85% sure we've almost finished doing group icebreakers" could have very well become "We're 85% done with the CBA". There's no real way of knowing exactly how much progress has been made but at least the two sides are meeting with the ostensible goal of a settlement.

Keep your fingers crossed that this will happen before the July 4th weekend because if it does, most experts believe that we'll have time for a 'normal' season: training camp, preseason, and 16 glorious games.