SportsNation is running its 2011 NFL Draft grades poll, putting the power of evaluation into the fans hands. The Arizona Cardinals came away the big winners, earning an A letter-grade from the fans. The Seattle Seahawks, on the other hand, earned the lowest grade, picking up a C from the fans. Both the San Francisco 49ers and St. Louis Rams picked up a majority of votes in the B category.

Below is the SportsNation map for the Seattle Seahawks draft grades. It shows a few interesting trends, so see if you can spot them. 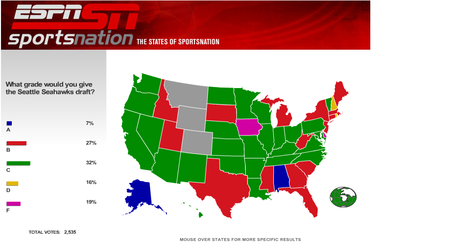 I'm left with a few questions here, though I think I have answers. Alabama loves the draft, giving it an A, because the Seahawks took James Carpenter in the first round. Crimson Tide fans definitely support their own. But Alaska with the A? I can't figure out why the state loves the Seahawks' draft, unless the wisdom of Mel Kiper hasn't spread that far north yet.

And why does Iowa hate the Seahawks? Still upset Seattle didn't draft American hero Ricky Stanzi? I'd also like a word with the 10 people from New Hampshire and Rhode Island who gave the Seahawks a D. Bunch of rebels up there. In fact, the Northeast simply hated the Seahawks draft, along with the Southeast and Texas.

It is interesting the rest of the nation voted in blocks, with large chunks giving the Seahawks a C. If the crowds are right, at least the Seahawks passed this exam, which we can take solace in.