Seahawks vs 49ers: The Power of the Explosive Play

If the Seahawks are going to beat the 49ers this weekend, it will probably be with explosive pass plays and not their rushing attack. I explain..

Share All sharing options for: Seahawks vs 49ers: The Power of the Explosive Play

I'm going to keep the commentary on this one short and sweet. The Seahawks host the 49ers this week, and they're a team, much like the Seahawks, whose defensive identity is centered around stopping the run. They haven't allowed a 100+ yard rusher this season. They haven't allowed a single rushing touchdown this season in 14 games. That's an NFL record, boys and girls.

The Seahawks, on the other hand, base their offense around the run. They've run the ball 167 times to 136 pass attempts in the past five games. Here's the problem with that - the 49ers have the best run defense in the NFL, giving up 71 yards a game and 3.3 yards per attempt. Simply put, the Seahawks are going to have to create points on the arm of Tarvaris Jackson. That's where the 'explosive play' comes in.

Pete Carroll defines an explosive play as a play that gains more than 16 yards. I'll go with 20 because I don't know where the statistics for 16+ yard passes is found. This season, Tarvaris Jackson has 39 pass completions of 20+ yards, good for 14th in the league in that category. The run heavy nature of the Seahawks offense has allowed the Seahawks to strike with precision downfield on play action and by lulling the opposing defenses into anticipating the run.

Despite that, Tarvaris Jackson, in 12 starts, has already has surpassed Matt Hasselbeck's mark of 33 'explosive' passing plays in 14 games last season, all while passing much less frequently. Hasselbeck had 444 attempts last year and Tjack has attempted 387 this season.

All this statistical jibberish implies that these deep, methodical and strategic attacks down the field are a bigger part of the Seahawks offense this season despite their overwhelming commitment to the run. And that's exciting! Because who doesn't love the big play??

Seattle faced Chicago last week, and managed but 60 yards on the ground on a 1.8 yard per attempt clip. At the half, the Seahawks had rushed for 34 yards on 2.1 ypc. Jackson was 4 for 12 for 51 yards through the air. In other words, the offense wasn't doing diddly, and Seattle was down 14-7 to a team with no offense.

To start the second half, the Seahawks received the ball. To try to get out of the funk they'd had in the first half, both running and passing the ball, they tried to consecutive play-action naked bootleg passes to tight ends. The first was caught by Zach Miller for a yard. The second was dropped by Cameron Morrah but it's just as well as it probably would have been a loss.

At this point, Tim "I used play play for the Bears but am by no means biased for them" Ryan, the color commentator, had this to say:

"Well, the Bears are just all over what the Seahawks are trying to do offensively. I could see Lance Briggs calling out the bootleg there before the play and Brian Urlacher went over afterwords and said "yeah, you were all over that". I mean, these guys are in the heads of the Seattle Seahawks.

And, those last two plays, you can tell by how the defensive ends have played and have gotten upfield versus those spread out boot options, they know Seattle's plays before they snap the football."

Much to my eternal satisfaction, Ryan's comments would spell the beginning of the absolute collapse of the Bears' defense. The next three plays, the Seahawks would pick up 79 yards and a touchdown, then never look back while completely blowing out the Bears team that apparently knew Seattle's plays before the even snapped the football.

I bring these plays up because I can imagine a similar scenario playing out this week against an extremely stout 49ers defense. If this Niner defense has one flaw, it's that they've been prone to giving up big plays over the top. With that in mind, let's take a look back at two plays that set up the touchdown I just mentioned against Chicago - a 33-yard strike to Golden Tate followed up immediately by a 43-yard rainbow to Ben Obomanu that put some fire back in the Seahawks offense and wrested the momentum from Chicago's paws.

The Seahawks go three wide here, with Ben Obomanu out to the left wing, Doug Baldwin in the slot, and Golden Tate on the outside to the right. Zach Miller is in-line as the tight end to the right and he'll run a quick comeback route. The rest of the routes are highlighted below.

As for the Bears, they're in a cover-2, as they've been known to utilize, and they will be blitzing.

Ball is snapped. As you can see below, the Bears send Lance Briggs up through the middle and Brian Urlacher is tasked with making sure Justin Forsett doesn't do anything tricky. He mirrors the Seahawks' running back out of the backfield onto the wing.

That leaves two safeties deep, with man-coverage on the Seahawks receivers. 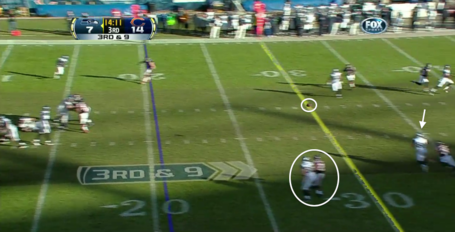 Golden Tate then does what he's good at doing. (He breaks a few tackles and runs all willy-nilly for an extra twenty or so yards.)

The Seahawks picked up 33 on that play, which was nearly half of their total yardage in the first half. Yahoo! Now we're on to something!

The very next play.

The Bears are in a cover-2 again and the Seahawks line up in what looks to be a run-oriented personnel grouping, with Michael Robinson and Marshawn Lynch in an I-formation with Zach Miller motioning across the line prior to the snap.

As you'll see, when the ball is snapped, Bears' safety Craig Steltz runs toward the line hard, anticipating a run. This leaves Ben Obomanu on a complete island with CB Tim Jennings (bottom of your screen). 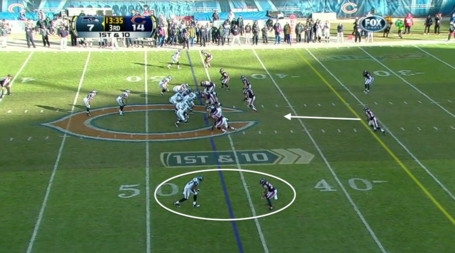 Obomanu simply has to beat the press. 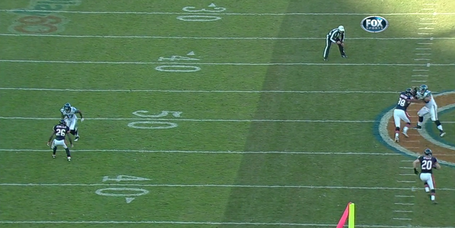 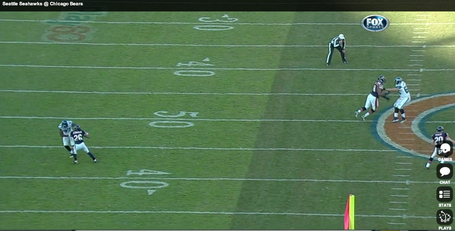 He does. The Fox logo is pretty much directly in the way in the photo below, but you can Obo getting past Jennings and also can see how absolutely wide open the field in front of Ben Obomanu is. I've circled Steltz by the line going "ooooh crap" and turning to run downfield. T-Jack simply let's it fly. 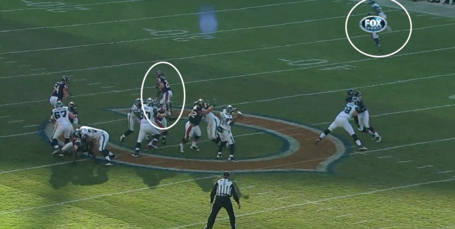 Unfortunately, the pass is a little to the sideline which forces Obo to drift out of bounds. Regardless, the ball is placed at the 3-yard line and Marshawn Lynch does the rest on the following play.

Keep these explosive downfield shots in mind as the Seahawks take on the Niners Saturday. Running isn't going to work very well, I would venture, so these types of big plays might be the difference in the game.