A look at the impact Doug Baldwin and Ben Obomanu are having on the the Seahawks offense this season.

During these last two seasons under Pete Carroll and John Schneider's stewardship, the Seahawks have gotten bigger, faster, and stronger at nearly every position. Gone are the days of finesse, cutesy teams that dink and dump their way down the field. We've got two starting cornerbacks right now that stand 6'4 and 6'3 and both over 200 pounds, probably the biggest in the league.

The NFL's receivers are trending to... well, big. Calvin Johnson, Andre Johnson, Dez Bryant, Larry Fitzgerald, Hakeem Nicks, Dwayne Bowe, AJ Green, Julio Jones. The list goes on. During the offseason, the Seahawks went out and signed Sidney Rice, who at 6'5 would stand opposite 6'5 Mike Williams and the Seahawks would be unstoppable with their "Twin Towers" receivers. It was going to be awesome. We're going to be like the Chargers. The teams like the Steelers, Bears, and Patriots are weirdos for keeping all these short guys!

Bring in more huge guys! Kris Durham! He's 6'6! Awesome. Zach Miller is 6'5, John Carlson is 6'4, think of all the mismatches we're going to create! This was (I kid, but actually kind of) my thinking before the season and though I don't think I was necessarily completely off-base about that idea, I did tend to forget that the speedy little bastard receivers still have a pretty damn big place on NFL rosters.

If you go look at the NFL's league leaders in receiving yardage, guess who sits at the top? Steve Smith and Wes Welker, two receivers whose diminutiveness can only be measured in their height. These are big-time players, making big time plays for their teams.

While the big receivers can be and are very effective, especially in the redzone, it's become more apparent to me that for teams to have success passing the ball a little balance and diversity of skillsets is helpful in an offense.

The Seahawks are a good example. With Rice, Williams, Durham, Miller, Carlson, Anthony McCoy and even Cameron Morrah in the mix, I remember thinking, "who is this Doug Baldwin character, and why are they interested in some 5'10 dude? I'm bigger than this guy." I sort of wrote him off immediately anyway, especially considering the Seahawks still have Golden Tate.

Well, after watching Baldwin in training camp, I came to my senses. After watching the Seahawks first seven games, I've really wised up. Size matters in some areas - the redzone especially and on jump balls and fades, but it's those speedy, wily, shifty slot guys have a very important role, and it often times means getting your offense into the redzone.

Ben Obomanu and Doug Baldwin have been huge for the Seahawks this year despite their slighter, shorter frames. Obomanu, at 6'1, 204 and Baldwin at 5'10, 190 look small when lined up next to Mike Williams, Sidney Rice, and Kris Durham, but their speed and elusiveness make them very dangerous weapons.

I've said this a few times over at Field Gulls, but I believe that Obo and Baldwin are the best open field runners on the Seahawks roster (with Golden Tate in the mix as well), and getting them involved in the offense has been one of Seattle's main focuses.

Let's take a look at a few plays from last Sunday's game, late in the half, where the Seahawks did just that.

The Hawks are driving, looking to get on the scoreboard. If you remember, they had this one, particular goal line play that came up a bit short. Not sure if you heard about it or not. I'm not going to talk about that here. Regardless, lost in all this is that the Seahawks went down the field in under two minutes to put themselves in that position and it started with Doug Baldwin and Ben Obomanu.

3rd and 4, 1:33 remains in the half. Ben Obomanu and Doug Baldwin are going to run crossing routes against the Bengals cover-2 defense. Justin Forsett is the running back that is set back off the line slightly, and he'll be running a sideline route. Anthony McCoy, in-line tight end to the left, is going to run a seam route and he'll end up blocking for Obomanu when he makes the catch. Sidney Rice, bottom of your screen, will do the same. 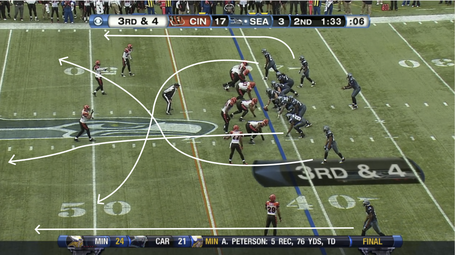 Ball is snapped. I've placed circles around two of the Bengals' linebackers, and Baldwin and Obomanu's crossing routes are going to thoroughly confuse them. 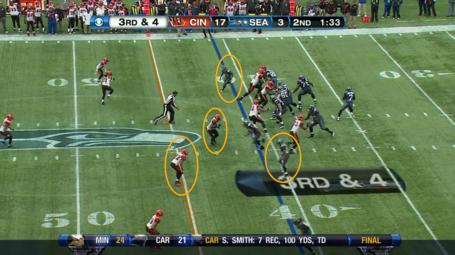 Above you can see Obo and Baldwin about to cross paths. The line's protection has held up nicely to let this play develop. 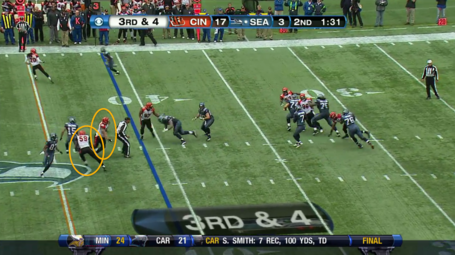 I've now circled, above, the two Bengals linebackers, and #59 is just about to realize he's toast as Obomanu slips behind him and goes unguarded.

Meanwhile, down the field, the Bengals' safety to that side is concerned with a streaking Anthony McCoy, see box below. Sets this play up perfectly for Obo. 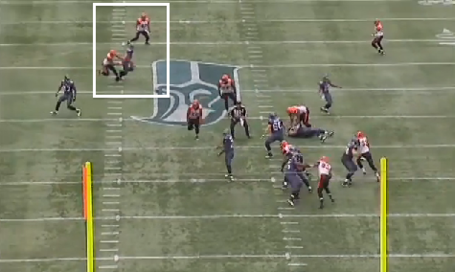 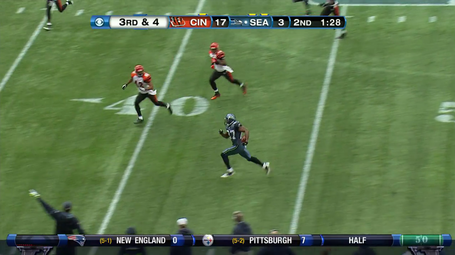 You can now see the safety to Obomanu's side (L), who has just stopped worrying about McCoy's seam route and is now pursuing the play. Sidney Rice lays a pretty sick block  on him to spring Obomanu for even more yardage. 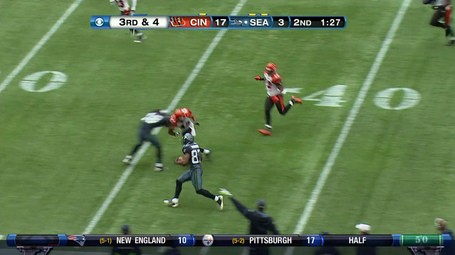 It's a gain of 32 yards and puts the Seahawks in a spot to threaten before the half.

But they're not done. On the next play, Sidney Rice runs a sideline go route into the endzone but the pass from Tarvaris Jackson flies too far. It's now 2nd down and 15 (after a false start by John Moffitt), and the Seahawks are at the Bengals 32-yard line with 1:01 remaining. Guess who they go to.

The Hawks line up in a 3 WR, 1 TE, 1 RB set with Kris Durham wing left, Doug Baldwin split out to the left slot, Golden Tate out to the right, and Anthony McCoy inline tight end to the right. Incidentally, this is a very interesting personnel grouping for this type of play - no Sidney Rice, no Zach Miller. Interesting, but I like it. 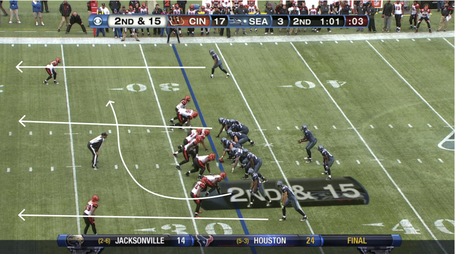 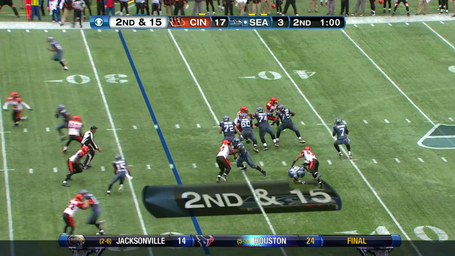 Ball is snapped (above). Justin Forsett does what he's best at - picks up the blitz with a nice cut block. This allows Tarvaris Jackson to step up into the pocket - this step up makes the middle linebacker (near Baldwin above) hesitate for one second, fearing the run. This allows Baldwin to get some separation and Tarvaris delivers a little dumpoff. 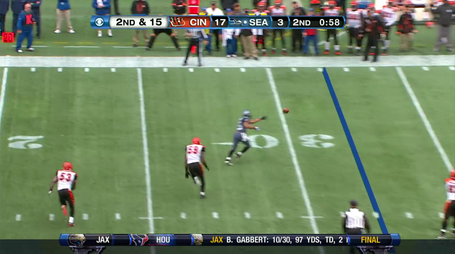 Baldwin is now through and is getting trailed by that middle linebacker (#59). He makes a slick one handed grab (of course, because he's awesome), and turns upfield.

Baldwin uses his speed against to slower linebackers get the corner, and to pick up the first down. This gives the Seahawks another chance to take the ball in and score before the half.

Doug Baldwin leads the Seahawks in receiving. As a rookie. As an undrafted rookie. He's got 25 receptions thus far for 403 yards and two touchdowns. Sidney Rice is behind Baldwin, but not far behind them is Ben Obomanu with 21 receptions for 242 yard and two touchdowns. Impressive for both of those players, and I'm sure they'll be key in this week's matchup with the Cowboys.

Look for Baldwin, Obomanu, and Tate on the underneath routes, screens, and dumpoffs. These are a big part of the Seahawks offense in moving the ball down the field, and it's not always about the deep passes to Sidney Rice or the back shoulder throws to Mike Williams. I've learned my lesson, I will not judge a book by it's cover anymore.