Breaking Down the Seahawks Rush Defense

Taking a look at two different run plays that had different levels of success for the Bengals as they tested the Seahawks run defense.

Share All sharing options for: Breaking Down the Seahawks Rush Defense

Football has been compared to a game of chess. You've got 22 moving parts, and trying to figure out what to do with the 11 offensive players in order to neutralize the 11 defensive players is one of the toughest jobs in the business. You can design a brilliant play on paper but then find it won't work against certain defensive formations, personnel packages, or players. Hell, you can run the same play twice against the exact same defensive call and players and get totally different results.

That's exactly why I find it so interesting to go back and take a look at the nuts and bolts of certain plays. Why'd they work? Why'd they fail? Who was to blame? Who shined?

The Seahawks run defense, after eight weeks of play, currently ranks first in the NFL on an opposing team yardage per rushing attempt scale. They give up just 3.1 yards per rush to the teams they've taken on, but trying to figure out how they do that is the hard part.

Obviously, some of it is due to their personnel - Big Red Bryant on the end, Brandon Mebane and Alan Branch in the middle, and the versatile Chris Clemons on the other end make up a huge, run clogging line, and Leroy Hill, David Hawthorne, and K.J. Wright certainly do a great job of filling in the gaps. Kam Chancellor is a big hitter in the secondary and Earl Thomas is a ball hawk. Also helping matters is that Seattle has a couple very physical corners in Brandon Browner and Richard Sherman.

At the end of the day though, most of the success and failure of rushing plays goes to winning individual matchups. Let's take a look at a couple of run plays the Seahawks defended last week agains the Browns - one good and one not so good - and break down what happened.

First quarter, the score still notched at 0-0. The Bengals are driving into Seattle territory and are in a 1st and 10 situation. The Hawks are in a pretty standard set here to counter the Bengals heavy, two tight end package. The Bengals two tight ends are stacked to the left of their formation. Brandon Browner, the CB at the bottom of your screen, has creeped in close to the hashmarks. 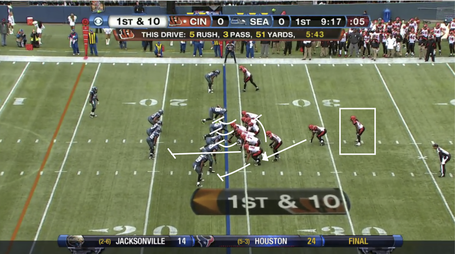 I've marked where each offensive lineman and tight end/full back will be blocking. The set back tight end will pull to the right and taking his spot will be the fullback. The left tackle will release downfield to block the strong side linebacker Leroy Hill, and the in-line tight end will come off to his left to pick up Brandon Browner.

Ball is snapped. Red Bryant goes unchecked as the tight end releases to pick up Browner and the left tackle releases to pick up the SLB, Leroy Hill. This leaves 330 pound Bryant to take on a block by the 230-250 lb fullback. Guess what that fullback is going to do?

On the weakside, K.J. Wright has sniffed out the play all along and has knifed through the line. I've placed a small circle around his head, it's pretty tough to see, but he does his part to keep Bernard Scott, who has just taken the handoff, from slipping back to his right.

The play is designed to go through the C-gap, which is Red Bryant's domain.

The fullback wisely, but unsuccessfully tries to take out Bryant's legs but Bryant does enough to stay on his feet, kinda. Either way, he and KJ Wright do enough to misroute Scott to his left. This is where Leroy Hill is able to get off his blog and pursue the play. 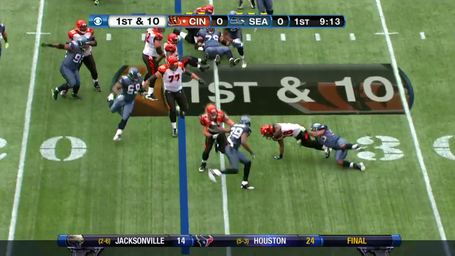 The play was originally blown up by Big Red Bryant, which isn't a huge surprise. He's been a beast against the run, but was finished by the wily veteran Leroy Hill and the containment by the cornerback Brandon Browner. Nice job by the defense here.

Let's look at a play that lost containment. Later in the 1st quarter, the Bengals are in a very similar situation, driving into Seahawks territory. I've marked off again where the blocks are to be laid.

The Bengals are in a similar set here sans the fullback (instead, putting a receiver split out of the two tight ends in a stacked formation. The receiver on the strong side is going to run a reverse route and the split back tight end to that side is going to pull to his left. The left tackle and guard will release forward and take on the weakside and middle linebackers, David Vobora and David Hawthorne. This time, the play works quite well. 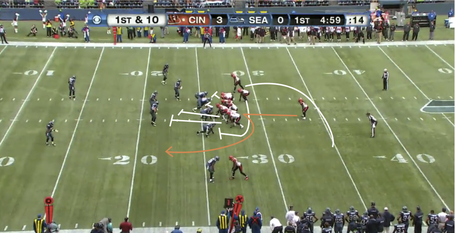 The pulling tight end (might be a fullback -either way, we'll call him the "H-Back") does a good job of pulling to his left and neuralizing Chris Clemons on this play - the crux of how this run works.

Above you can see that Bernard Scott is about to take the handoff from Andy Dalton as the H-back looks to downblock on Clemons. The line is all blocking to the right, which goads the linebackers into thinking a run is going that way.

The H-back takes out Clemons with a cut block and Scott does a nifty slipstep to his left to rush through the opening.

By the time the linebackers catch up to Scott, he's already into the secondary and nine yards downfield. Not that any one person is to blame for this, but that cut block on Clemons was key to this one going so far. If he'd have been able to get off that block - something he's actually very good at - the play would likely have been stopped in it's tracks.

As could be expected, I have no magic formula for success defending the run and no real thesis to this article. I simply enjoy breaking down plays and hopefully this has given you something to chew on.