Seahawks Vs Giants: The Safety Dance

The Seahawks' safeties and their versatile and variable use.

Share All sharing options for: Seahawks Vs Giants: The Safety Dance

One thing you might notice about sports writers is their enthusiasm for puns and or cultural allusions in the titles or their articles. I usually stay away from those but for today I said f*^k it and went with a reaching reference to that amazing 80's song. Now, because I took that leap I have to include the video of it too. Because it's an awesome song. Seriously.

Anyway, I wanted to talk about the way the Seahawks use their safeties. And how the way they move around and are so versatile and variable from play to play, it might be considered a "dance". Facepalm.

With this defense, both strong safety and free safety have to be very versatile and savvy players. Gus Bradley and Pete Carroll ask both positions to get involved in run support, pass support over the top, and blitzing. They have to be strong enough and wily enough to be able to run with tight ends and running backs and also quick enough and smart enough to keep up with slot receivers. It's not an easy job and thus far this year Kam Chancellor has been doing a pretty good job of it.

With Chancellor out of last week's game and possibly out this week, veteran safety Atari Bigby has been stepping in. Overall, he's filled in nicely and made some big plays. Bigby, Chancellor, and even Jeron Johnson have been seeing some playing time this year at strong safety and as nickel and dime backs in certain personnel packages.

Let's take a look at two plays that happened very close to each other in the 1st quarter of the Seahawks matchup with the Falcons last week, with the idea that it will give you something to watch for: safeties used in run support and blitzing.

The Hawks actually blitz with their safeties quite a bit. I don't have any statistics on that in front of me, but off the top of my head I remember seeing Earl Thomas, Kam Chancellor, and Atari Bigby in the backfield causing havoc, making tackles for losses (tackles for a losses? tackles for a loss? tackle for losses? I dunno), and getting sacks. There are obviously pros and cons to this aggressive use of safeties. Let's take a look.

8:19 left in the 1st quarter. Still no score, but the Falcons are driving into Seahawks territory. 1st and 10 from the Seahawks' 19 yard-line.

I've pointed out the defensive alignments here. Atari Bigby is the strong safety in this set and because strongside linebacker (SLB) Leroy Hill has creeped up onto the line, Bigby has dropped in to a spot that you'd normally see a linebacker. Bigby still has the ability to drop back into deep coverage or help on the run, and that makes it difficult for Atlanta QB Matt Ryan to automatically audible out of this look -- a very anti-run initial setup by the Seahawks, with 8 men in the box. 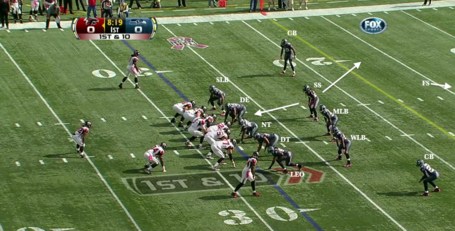 He doesn't change the play. The ball is snapped.

Because Ryan has decided not to audible to a pass, the Seahawks have the advantage. Above, you can see that Bigby has sniffed out the run quite well, and hits the gap hard to stop Turner in his tracks.

Good play by the veteran.

In this next play I've highlighted - a few plays later in the course of the game, you see Matt Ryan exploit the Seahawks liberal usage of their safeties.

The Falcons are marching, at the Seahawks 26 yard line and in a 2nd and 9 situation. You can see Atari Bigby (SS) creeping up a bit and Matt Ryan probably notices this. ATL receiver Roddy White is to the bottom of your screen as the split end and he's matched up with CB Marcus Trufant. 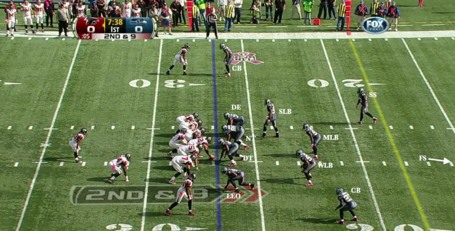 You can see it's play action and Bigby is blitzing. The Seahawks weakside and middle linebackers, K.J. Wright and David Hawthore, realize that it's play action to late to do much about this and with Bigby rushing forward on the safety blitz, there's a pretty good chuck of wide open real estate here for Roddy White.

White runs a slant and has only Trufant in his vicinity as he makes the catch. Earl Thomas comes in from the free safety side but takes a weird angle on his pursuit. White takes advantage.

I've marked with a circle approximately where White is tackled. So as you can see, using a safety to blitz, when he doesn't get home, can be a dangerous proposition. Whether it's Kam Chancellor, Atari Bigby, or Earl Thomas, the Seahawks are taking a risk when they send them in to attack in the backfield. Keep an eye on this against a Giants team that has been very good in their passing attack thus far, led by the streaking Eli Manning.