Mike Williams is only dangerous if you throw the ball his way.

Share All sharing options for: Seahawks' Passing Game Picking Up The Slack

A lot was made about Seahawks' receiver Mike Williams' notable absence from the offense in the first three games of the season. In particular, Williams had been pretty invisible in the games against Pittsburgh and Arizona - catching one pass for 9 yards against the Steelers and catching nothing against the Cardinals.

Said Tarvaris Jackson, after the Seahawks narrowly beat the Cardinals, "Obviously, we want to get the ball to Mike a little more. We didn't connect (that game). We didn't have a lot of plays and defenses - he probably was open a couple times, if I go back and watch the film, I'll probably see him open a couple of times on the pictures.

"We just have to do a better job of making sure I look for that (and) we get some plays where we get him the ball."

This came after Jackson connected with Sidney Rice for 8 catches and 109 yards but only targeted Mike Williams once.

Seahawks coach Pete Carroll noted, "It's not just Mike. I don't care who the guy is, it's the guy on the other side and I just want to balance things out. We'd like to get Zach (Miller) a few balls, too. But it will happen, and it will come when it comes."

Well, the Seahawks certainly improved in the passing game against the Falcons and Giants. Jackson threw for 319 yards on 25 for 38 passing, 3 touchdowns to 2 interceptions vs Atlanta and Jackson and Charlie Whitehurst combined to throw for 315 yards on 26 of 41 passing, 2 touchdowns and an interception.

Why have they been more successful? Well, one reason was their continued use of downfield passing; against Atlanta, Jackson connected with Sidney Rice for a 50-yard touchdown pass and hooked up with Doug Baldwin for a 30 yard completion as well. Against New York, Jackson connected with Baldwin on a 25-yard reception, and Whitehurst hit him for 27 yards.

The other reason their passing attack has improved is that Tarvaris Jackson and Charlie Whitehurst have been standing tall in the pocket and threading the needle. They're making passes into contested windows, something you didn't see the Seahawks do very much of early in the season, and it's paying dividends.

As Mike Williams returns to the fold this week against Cleveland, this willingness to throw into tight windows will be very important.

With Mike Williams' size and speed, he's not going to get a lot of separation so for him to be successful you just have to throw it to him and trust that he'll use his body to shield the defender to make the grab. We saw this a lot last season, and BMW and Matt Hasselbeck had a great chemistry for this. It's the reason Mike was the Seahawks leading receiver and it's one way this offense can become even more dangerous as this season goes on.

Thus far this season, the Seahawks' quarterbacks and Williams haven't been on the same page because of timing issues and a reticence to throw into tight windows. Against Atlanta in Week 4, Williams' last game, it seemed like Tarvaris Jackson decided to throw caution to the wind a bit and start throwing BMW's way.

Below is an example: Big 3rd down and six to go, 10:56 in the 3rd quarter with the Seahawks down big, 27-7, and driving, at the Falcons' 26 yard line. If the Seahawks have a prayer of staying in this game, a first down here would be beneficial.

You can see the Hawks in their "11" personnel grouping: one running back, one tight end and three wide receivers. You can see Mike Williams flanked out left with tight press man coverage. Doug Baldwin is in the slot left, covered up by Atlanta's nickelback. The safety is played fairly deep, and the weakside linebacker to Mike Williams side is playing up. This is important, because one of the reasons that Mike Williams hasn't seen a lot of targets thus far is due to opposing teams' penchant to drop a linebacker into Mike's zone when he runs intermediate routes, thus further taking him out of the action. 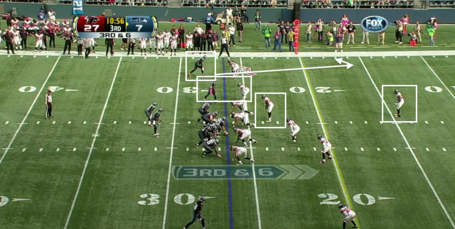 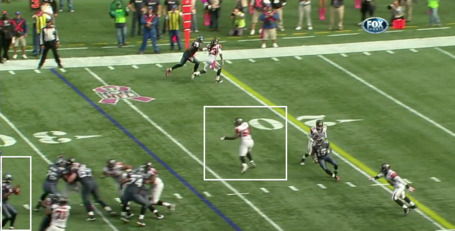 Jackson drops back and looks to throw to Mike, who has beaten the press and is running up the sideline. You can see that the weakside linebacker is looking to drop back into the intermediate zone, but is nowhere near the action on the outside, meaning Mike and his defender are mano-a-mano. 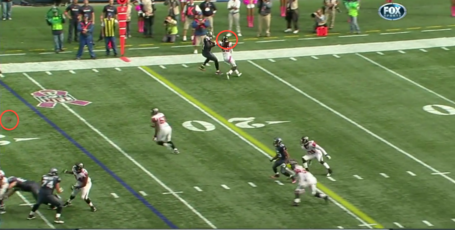 Mike breaks from his route at 13 yards and as you can see (red circles), the ball is in the air before the corner has even turned his head. This is essential, as the coverage is tight. Timing on this play is the most important factor.

By the time the corner has figured out Mike is running a stop route and has adjusted, the ball is in Williams' hands on a comeback, sideline route. He then overplays the pass and Williams runs down the sideline. 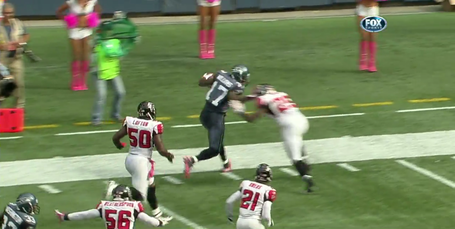 Williams picks up a big third down and proves to all of us that he's still a factor and still one the opposition needs to pay attention to. This play required timing and trust on the part of Jackson to throw the ball even before Williams' head was turned around to see the ball.

It came through, just out of reach of the cornerback, and Williams did a good job of using his body to shield the defender and break his tackle, gaining another five or six yards.

If Williams and Charlie Whitehurst/Tarvaris Jackson can start clicking the way that Hasselbeck and BMW did last season, the Seahawks' offense has the potential to blow the top off of teams. With Mike Williams moving the chains, Doug Baldwin in the slot catching everything in the middle, and Sidney Rice deep over the top, the Seahawks can get pretty damn unpredictable in their play-calling.

We've seen how success in the passing game has opened up things for the Seahawks run game. Now that Williams is back, there is potential for this Hawks offense to improve on the meager successes they've enjoyed in the past two weeks. Whether it's Whitehurst or Jackson under center, I'm just hoping they feed Mike Williams.

Seahawks vs. Browns: Seattle Loses 6-3 In Game For The Ages