Seahawks Vs Falcons: Some Notes On Personnel Packages

Taking a look at some of the Seahawks defensive sub-packages.

Share All sharing options for: Seahawks Vs Falcons: Some Notes On Personnel Packages

The Seahawks have several distinct schemes and personnel packages that they will use regularly, so let's talk about them a little bit! First of all, the base package is a 4-3: four defensive linemen and three linebackers. I talked about that a little bit Week Two here, and we've been covering some of the variations the Seahawks have been using over at Field Gulls this week, you can find that here.

Nevertheless, read those, then come back and we'll show you something a little different and recap real quick. 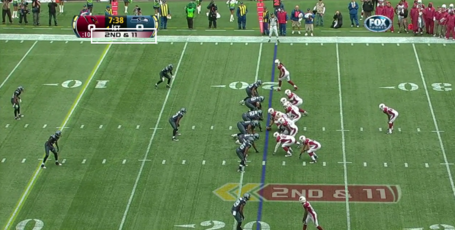 Here's a pic of the Seahawks 'base' personnel package but in an interesting formation. You can see that the Hawks front four are lined up as usual but both outside linebackers are playing on the line of scrimmage. This is something that happened more last year but the Hawks have been playing their linebackers back a lot this season as well. Regardless, you can see David Hawthorne in the middle, Leroy Hill on the strongside, and K.J. Wright on the weakside.

Ok, now, let's talk about the Seahawks' nickel package. This package can be used on passing downs or against sets where the opponent runs out three or four receivers. I'd like to say it's easy to guess when the Hawks would use their nickel package but they actually vary it up quite a bit. An example: 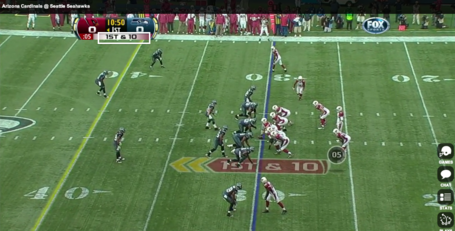 In this set the Seahawks have their normal 'nickel' middle linebacker Matt McCoy lined up in the middle. The Hawks have their normal front four here - Red Bryant on the strongside end, Brandon Mebane as the nose tackle, Alan Branch as the weakside d-tackle, and Chris Clemons on the weakside end. Brandon Browner is matched up at RCB in press coverage, and Marcus Trufant is lined up at LCB in off-coverage. Leroy Hill is the weakside linebacker in these nickel sets.

Nickelback Walter Thurmond is lined up to the left of LDE Red Bryant. Thurmond has been the Seahawks go-to nickelback for the most part this season. If you remember, safety Jordan Babineaux was used in that role a lot last year.

The first thing that's curious about this set is that the Hawks are in a nickel package on first and 10 with 10:50 left in the quarter. Normally, on first down in this field position and time you'd expect to see the base but I like that the Seahawks are rolling out different looks and keeping opposing offenses on their toes.

That's not the only DB-heavy set that the Seahawks run. Another example from last week's game against the Cardinals: 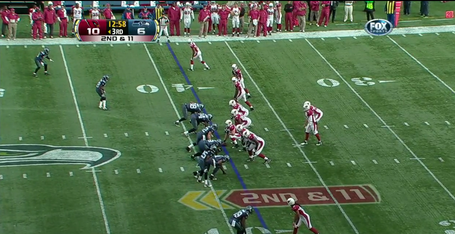 You can see that the Hawks have what looks like a dime set out here to counter a four receiver set on 2nd and 11 early in the 3rd quarter. Brandon Browner is in press coverage on the right, Marcus Trufant off-coverage on the left. Walter Thurmond in the slot as the nickel back and rookie Richard Sherman has replaced LB Leroy Hill in this package and is the dime back on the right.

The Hawks have their 'pass rush' defensive line in there - with 'jet-ends' Raheem Brock and Chris Clemons book-ending the line. On the strong side you've got d-tackle Anthony Hargrove, middle linebacker Matt McCoy up on the line, and Brandon Mebane to his right.

This package is designed for versatility and masking assignments. Brock and Clemons rush the passer, Hargrove and Mebane look to push the pocket, and McCoy, Sherman, Thurmond, and Kam Chancellor / Earl Thomas off screen can either drop back in coverage or blitz. Even Brandon Browner and Marcus Trufant rush the passer in a zone blitz. Exciting stuff! 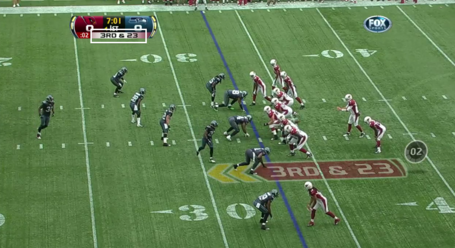 Now this is a doozie of a set. Browner and Trufant as RCB/LCB like usual; Browner in press, Trufant back. In this set, S Atari Bigby has replaced, of all people, DT Brandon Mebane and the Seahawks are now in what they call the "Bandit" package -- essentially a 3-1-7 set with three down linemen, one linebacker, and seven defensive backs.

This set is rolled out in obvious passing situations, usually in third and long. Here, the Cardinals are in 3rd and 23 in Seahawks territory. The Hawks have run Raheem Brock, Anthony Hargrove, and Chris Clemons out as their defensive line. Atari Bigby, Richard Sherman, and Walter Thurmond are mulling about, masking their intentions. Kam Chancellor and Earl Thomas (off screen) are doing the same, disguising whether they'll blitz or drop back in coverage.

Matt McCoy is sitting in the middle, doing much of the same. Again, this package has a ton of versatility and is obviously geared with keeping pace with the Cardinals receivers. The Seahawks love to blitz in this package and we saw Earl Thomas do just this several times this year already. Atari Bigby is good on the blitz and the Hawks aren't shy about sending a different guy on every play.

As can be expected, this set isn't going to stuff the run. Typically, if the opposition does decide to run a draw, they'll gain 5-10 yards but that's acceptable with this down and distance.

Anyway, I'm starting to ramble a little bit but I just wanted to give you some looks at the types of personnel groups you may see this week. Keep an eye on Matt McCoy, Richard Sherman, and Walter Thurmond and note when they're on the field. Typically, unless they're giving someone a breather, the Seahawks are running something outside of their base package. That's when things get interesting on the defensive side of the ball.