Seahawks Vs. Falcons: The Relatively Unheralded Return Of Leroy Hill

A little bit about Leroy Hill's role on this Seahawks defense.

Share All sharing options for: Seahawks Vs. Falcons: The Relatively Unheralded Return Of Leroy Hill

Naturally, with stopping the run, the first line of defense is the line. Red Bryant, Brandon Mebane, Alan Branch, and Chris Clemons, in conjunction with backups Clinton McDonald, Anthony Hargrove, and Raheem Brock have done a great job so far and the Seahawks run defense ranks near the top of the NFL.

Football is one of the ultimate team sports though, and the linebackers figure into the run defense quite a bit as well. I talked about this over at Field Gulls recently, and it should be pointed out that the Seahawks are running some different schemes than they did last year. The long of the short of it is that the linebackers are spending less time up on the line of scrimmage, concerned primarily with run support, and are now being asked to start off the line, behind the d-tackles and ends, and as a result must play instinctively and in space. Leroy Hill has done a great job thus far with this style of play, and I wanted to highlight one example of that.

When I go back and watch games, I try and look for the little things that individual players do to make plays. Pre-snap positioning, reaction times, angles, -- these are the things I try to watch for and all three of these came up with one particular play for the Seahawks early in the 1st Quarter.

Here's how it set up: 8:20 remaining in the 1st quarter with the Cardinals driving into Seattle territory. Arizona is lined up in a basic set - one tight end off the the right, two receivers in a balanced set, a fullback and a running back.

The Hawks respond with a base 4-3 'over' package here, a departure from some of the schemes they ran last year (that is explained in more detail here - quite interesting actually). Leroy Hill in playing the Sam linebacker spot and is positioned back a bit, another departure from last year's 4-3 "under" scheme where the strongside linebacker would typically play up at the line of scrimmage, just off the shoulder of the strongside defensive end, in this case, Red Bryant.

This is pertinent to this play, because despite playing back a few yards, Leroy Hill is still responsible for run containment on his side of the field. Watch how he plays this. 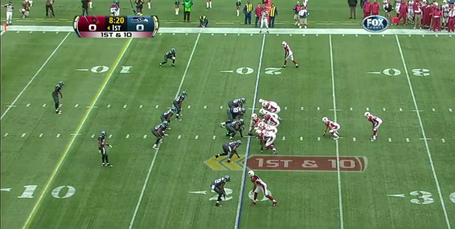 The ball is snapped. (below) 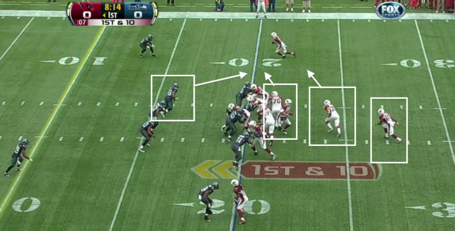 You can see the offensive right guard pull and head to the right. The fullback, Anthony Sherman, heads that way as well. Leroy Hill, possessing the cunning and instincts of a wolverine (or something) sniffs this out and makes a b-line for the edge. I stress this play also because of Hill's immediate and decisive reaction. One hesitation from him there and the edge could have been sealed off. I'll show you.

You see Hill, with the box around him above, taking a good angle on the edge and on the offensive side, Kevin Kolb is about to hand off to Chester Taylor. Also, for the defensive line's part, they haven't given up any ground to the Cardinals o-line, though this play is designed as an outside run.

You can now see that FB Anthony Sherman and the Cardinals' right guard (who I'm too lazy to look up) are now looking to seal the edge (Red Bryant and Leroy Hill) so running back Chester Taylor can get there and run clear. You'll note the amount of green on the outside there, with only Marcus Trufant, the corner, ten yards back.

This is where Leroy Hill does his thang.

Hill slices to the edge, collides with Sherman, knocking him off his feet, and the guard then tumbles over the two of them, completely blowing up the running lane. You'll now see Taylor hesitating, with no where to go but backwards. The rest of the Seahawks line has done a good job staying home.

The next instant you can see that Hill has acted like a bowling ball, taking out two of Arizona's pins with a single roll. Red Bryant has stayed engaged with his blocker (Red Bryant is awesome, by the way), and mops up with the help of Brandon Mebane, David Hawthorne, K.J. Wright, Alan Branch, and Chris Clemons. That's some swarming run D there.

Great, unheralded play by Leroy Hill to blow up Arizona's play call. Hill, once described by Lofa Tatupu as "Seattle's best linebacker" (on a team with All-Pro Julian Peterson and Pro Bowl Lofa Tatupu) continues to impress. He's been out of the game for a few years but I'm looking for him to have a big season.

Keep your eye on him this week.