Share All sharing options for: PHOTO: Aaron Curry Addresses Media As A Raider

Now that the Aaron Curry to the Raiders trade is officially official, Curry has joined his new team in Oakland today after a tumultuous day or two in limbo. The trade, which sent Curry to the Raiders for what's been reported as a 2012 7th round draft pick and a conditional (depending on playing time) 2013 draft pick, was announced, sort of, on Wednesday but wasn't finalized until yesterday afternoon. Because the NFL took a little while to approve the deal, Curry wasn't able to practice with the team on Thursday but arrived at Raiders' headquarters today and addressed the media. 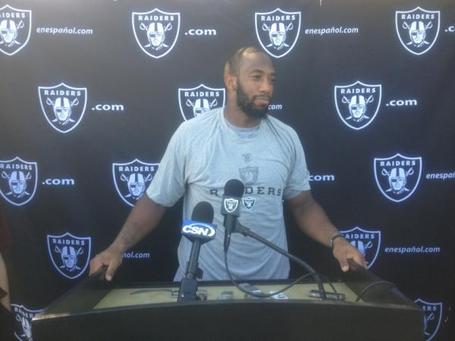 It's also been announced by head coach Hue Jackson that Curry will be starting at weakside linebacker for the Raiders and will play this week against the Browns, wearing number 51. Curry played that position this season for the Seahawks with varied results. Here's to hoping he can break out down in Oakland, earn a bunch of playing time, and that conditional pick in 2013 will end up being somebody special for the Seahawks. Oh, and for the benefit of Aaron Curry also, because he seems like a good guy.

Check out more Seahawks analysis and discussion over at FieldGulls.