By now, you already know the Seattle Seahawks made the NFL Playoffs with a losing record in 2010. At 7-9, the Seahawks are the first team to accomplish such a feat, winning the terrible NFC West despite not being able to climb to .500. A win over the St. Louis Rams at Qwest Field last night vaulted our hometown Hawks into the wildcard round of the playoffs, where they will host the New Orleans Saints on Saturday at 1:30.

A quick look at NFL.com this morning shows a curious omission when looking at the Seahawks schedule. After the jump, check out the picture, passed along by Lookout Landing's Jeff Sullivan. 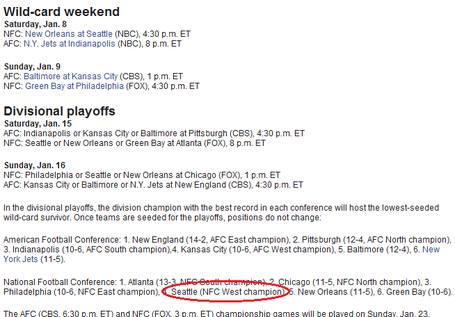 Look closely. Notice anything different in the picture? While the rest of the playoff teams show records and how the teams made the playoffs, the Seahawks are missing a key piece. Sure, they're the NFC West champion ... but where's the record. Either call it an accidental omission, or a purposeful mistake because the NFL is embarrassed.

Either way, the Seahawks are in the playoffs and hosting a home game. I'm sure fans in Seattle don't care what the record is this morning because a playoff berth is a playoff berth. Bring on the Saints.