We already know Seattle Seahawks running back Marshawn Lynch is fearless on the field. Lynch lives up to his beastmode nickname, inviting and seeking-out contact, as he demonstrated last Saturday against the New Orleans Saints. He's not the kind of player you'd want to go head-up with during a game. After all, he is powerful enough to cause a minor earthquake.

Never afraid to speak his mind, Lynch was happy to answer a question about earthquake preparedness on Wednesday, embracing the news that his game-clinching run on Saturday caused a small tremor. His response for fans that may be fearful of the rumbling? "Get up under somethin'."

Ladies and gentlemen, Marshawn Lynch. Forget duck and cover, just follow Lynch's advice. When you see him runnin', get up under somethin'.

After the jump, check out how Lynch is getting ready for the frigid temperatures expected in Chicago this weekend. 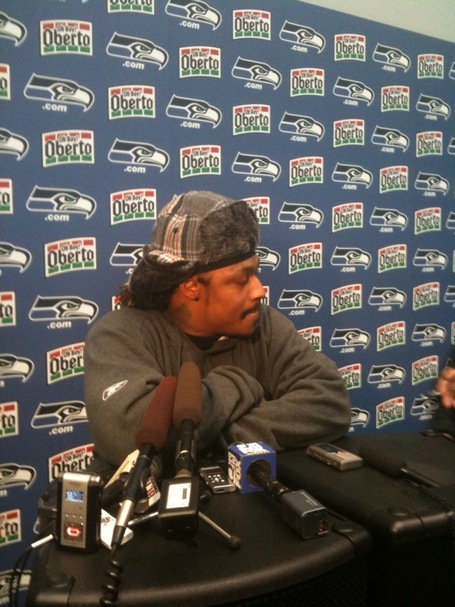 His quote on earthquake preparedness was funny enough, but picture it coming from a man wearing that hat.

Beastmode is quickly becoming a fan-favorite here in Seattle. We couldn't be happier to have beastmode, his bruising running style and his outstanding sense of fashion here in Seattle. Besides, how'd you like to get run over by a man wearing a Siberian hat?