Marshawn Lynch Goes Beast Mode On A Trash Can

Share All sharing options for: Marshawn Lynch Goes Beast Mode On A Trash Can

How bad was Sunday's Seattle Seahawks game against the Atlanta Falcons? Marshawn Lynch had some thoughts and used some non-verbal communication to express them. Apparently overcome by illness, whether physical or, upon seeing the offense fall apart in the second half, mental, Lynch hit the trash can for a healthy puke session on the Seahawks' sideline. One intrepid fan caught Lynch getting the evil out, or perhaps flipping the Beast Mode switch, during Sunday's game.

Click the image for Beast Mode in full glory. Notice Matt McCoy in the background giving Lynch a "what the hell?" look. Also notice the trainers nearby, not even phased by Lynch letting it fly. 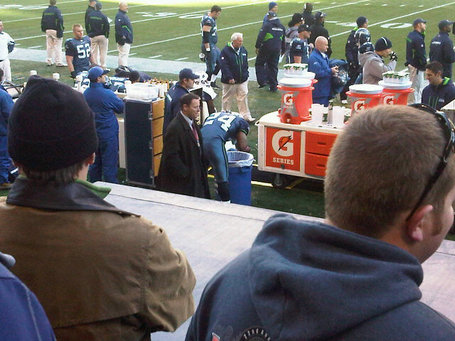 Credit to Nolan Blackie for the photo on Twitter and a hearty H/T to The Big Lead.

Lynch finished with 60 yards and a touchdown on 12 carries. Known for his punishing running style, Lynch has been a fan favorite since coming to Seattle following an early-season trade with the Buffalo Bills.

So what was it that caused Lynch to let it fly on the sidelines? His propensity for contact leading to a hard blow in the stomach? Pregame jitters? Matt Hasselbeck turning the ball over on three consecutive possessions?

The picture sums up exactly what happened on Saturday -- as the Seahawks puked the game away -- so perfectly, it deserves to be highlighted. Well done, Marshawn.