WAC Expansion: Seattle U Still In The Picture, But Big West & Moutain West Join Forces To Lure Hawaii Away

Share All sharing options for: WAC Expansion: Seattle U Still In The Picture, But Big West & Moutain West Join Forces To Lure Hawaii Away 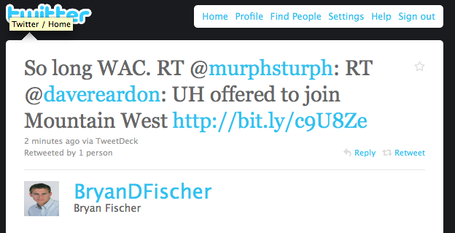 Seattle University is still not out of the picture for WAC expansion, according to Fred Lewis of the Honolulu Star Advertiser.

Expanded WAC still may not sate Hawaii
Seattle University, which had been under consideration as a non-football member, could be reconsidered in the wake of Montana's rejection. Benson said the Redhawks remain under consideration but gave no timetable for when "phase two" of expansion might be undertaken.

However, a new development might change that picture a bit: with Montana University officially deciding to remain in the Big Sky, the WAC needed to keep Hawaii because they have maintained the eight football members is the absolute minimum.

Well, Hawaii has been considering leaving the WAC for sometime either going independent in football or relocating altogether and now the Big West and Mountain West have joined forces to really jeopardize that football minimum.

UH offered to join Mountain West in football, Big West in other sports - Hawaii News - Staradvertiser.com
The University of Hawaii is being extended an offer to join the Mountain West Conference, the Star-Advetiser has learned.

Signs point to UH being offered a football-only membership, although MWC sources would not immediately confirm it.

A 7 p.m. press conference has been called for Bachman Hall to make the announcement.

No word yet if this is a press conference to announce an offer or an offer and acceptance, but things are not looking good for the WAC - or Seattle University's chances of finding a home - if Hawaii chooses to relocate for football.