Sonics Arena Rally: Everything You Need To Know About Thursday's Event

Share All sharing options for: Sonics Arena Rally: Everything You Need To Know About Thursday's Event

It's time to show your support, people of Seattle. It's time to rally up for your Sonics as the city tries to bring a hungry NBA fanbase another franchise once again!

The folks over at sonicsarena.com are getting a rally going this Thursday evening for all of your diehards out there, so clear your schedule, get your Sonics gear out of the closet and get your butts down to Occidental Park this evening!

Skillet
Off the Rez
Bluebird 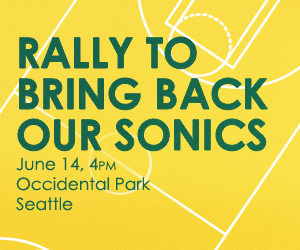 For more up to date news and analysis on the new arena, make sure to follow SB Nation Seattle's StoryStream.