NBA Finals 2012 Picks: Miami Heat Being Cheered On By Only Washington And Florida

Share All sharing options for: NBA Finals 2012 Picks: Miami Heat Being Cheered On By Only Washington And Florida

You might find this shocking, but there are two states that are rooting for the Miami Heat. The first one is the state of Florida since that's where they play basketball and all that jazz.

The second state? Well, you can probably guess. Take a look at the image after the jump to find out which one. 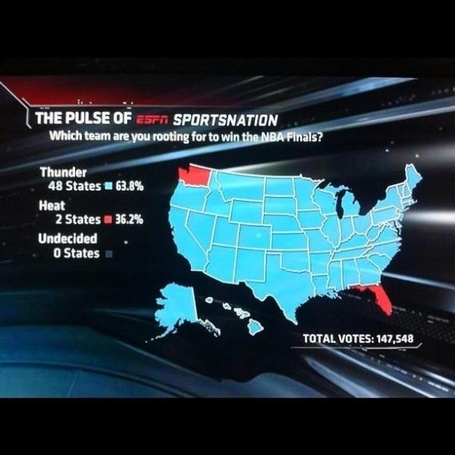 Background for those of you who hate sports: The Oklahoma City Thunder used to be the Seattle Supersonics, and immediately started taking off two years after they left their city. Now they're in the NBA Finals against a team most of the rest of the country despises in the Miami Heat.

So you have two teams that aren't very well-liked by certain segments of the population, turning this into a peculiar hate-fest where basketball is a sideshow to any fan in the state of Washington.

Check out our SB Nation NBA Finals coverage by checking out our hub below. Go to our YouTube channel below for additional coverage.