The Sonics had several participants in NBA dunk contests, but one former Seattle player had the distinction of losing to some of the best in the mid-80's.

When I started this article, I was going to highlight every time that Seattle had a representative in the NBA Dunk Contest. Besides, it's only happened nine times. However, by the time I had finished really examining 1987, the first such appearance, I remembered that I have a hard time paraphrasing. (See: This opening paragraph.)

Seattle hosted the 1987 NBA All-Star game and had not one but two players participate: Tom Chambers and Terrence Stansbury.

But as long as Treadway is not white, that meant that Chambers broke the color barrier. He's still waiting for his number to be retired by every NBA team.

The dunk contest itself would be more focused on Stansbury.

He was only in Seattle for one year and he was only in the NBA for three, but for each one of those seasons he participated in the dunk contest.

In 1985, he finished third behind Dominique Wilkins and Michael Jordan. (But ahead of Treadway!)

In 1986, he finished third behind Spud Webb and Wilkins.

Now he was on his home floor and was facing off against Jordan again. Would this finally be his year?

Introductions begin with Chambers, looking ever so excited to be making history. 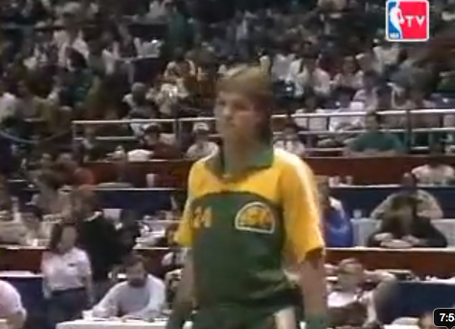 And then Terrence Stansbury 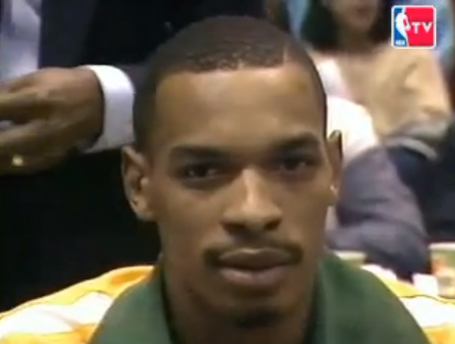 The rules are announced. Notice the lack of a "Wheel" or a "KIA Optima" 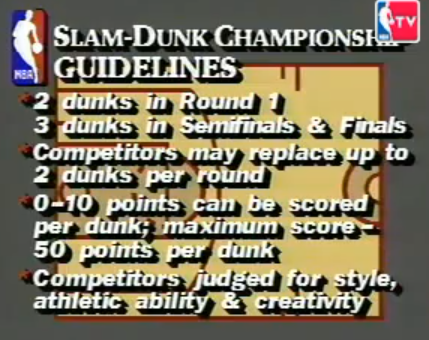 For his first dunk, Stansbury doesn't dazzle. In fact he never gets off the ground and he goes so slow. (At 6:20 of this video) 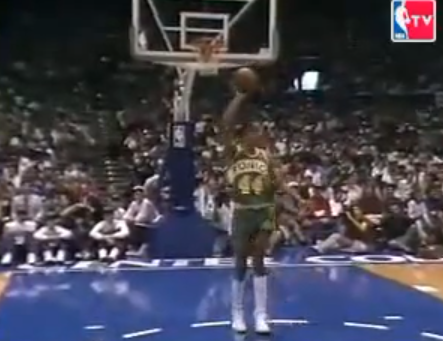 Oh, he's practicing. Yeah, sure, go ahead and practice Terrence. Nobody's watching. No need for element of surprise on the Stansbury of Liberty dunk. 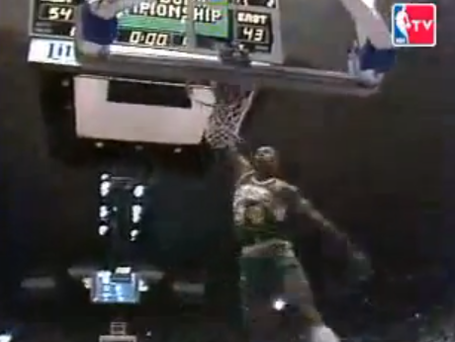 Sorry for making fun of you for practicing Terrence. He gets a 49 on his first dunk. 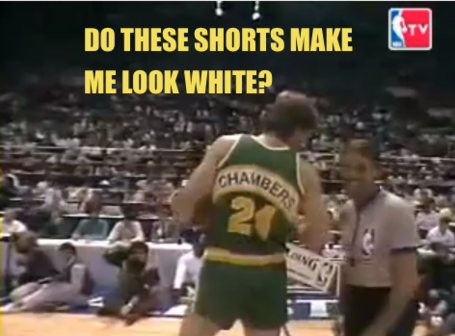 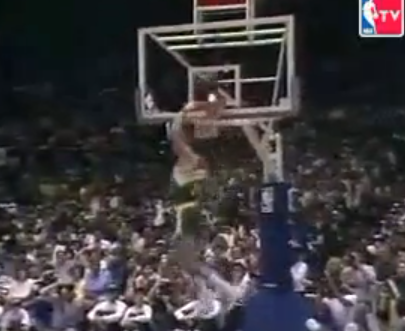 At 8:00 of the video, Chambers misses his practice round.

Wait, what's that? Oh. I'm being told that was not a practice round like Stansbury had. He makes it on the second attempt and scores a 41, which actually ties Michael Jordan's first dunk. Tom Chambers and Michael Jordan were once tied in a dunk contest.

(Going into one of his classic slam dunk victories, Jordan was fourth out of four and his second dunk was ridiculously over-scored because... Jordan.) 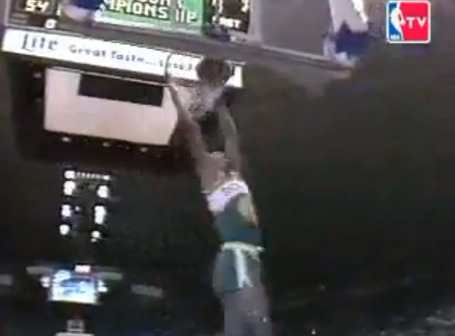 A recurring Stansbury theme will involve the mid-air pass-to-self dunk that got him most of the way through the 1987 dunk contest with the lead. 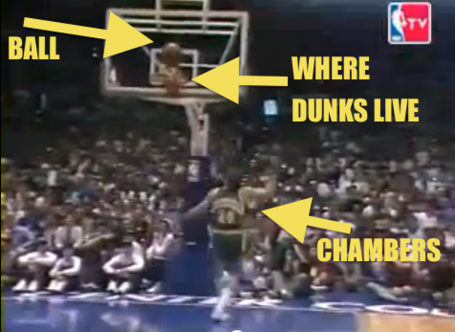 The announcers aren't even sure what the rules are, but Chambers doesn't get another chance and he gets a 21. If only this was blackjack.

Going into the semi-finals, Stansbury leads all dunkers with a total of 99 points.

For his first semi-final dunk, Stansbury threw the ball to himself in the air again and finished with a two-handed reverse. 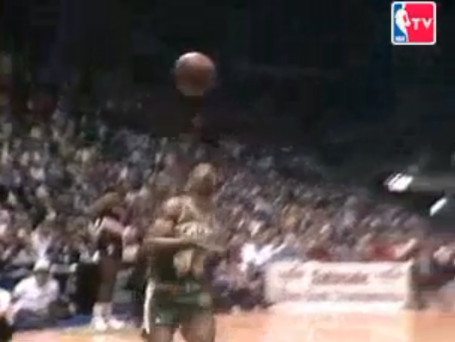 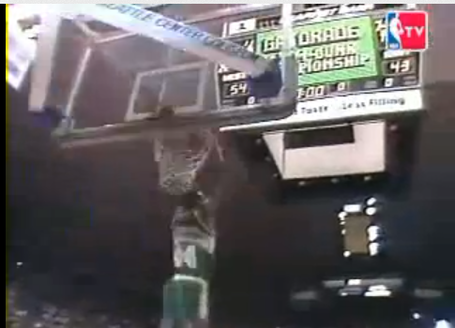 Stansbury gets a 49, even though the degree of difficulty sure seems tougher than his 50. The judges just feel that it's easier to do things behind your back than it is to do it in front. They're not a fan of being straight-forward, apparently.

On his second dunk in the semi-finals, Stansbury missed his first attempt (at 4:00 in the video) and though he made it on his next attempt, it was far too little too late. He got just a 45. 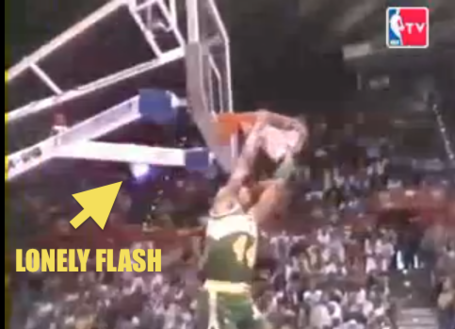 His third dunk was another toss to himself, another front-facing dunk. NOW it gets a 50 and the crowd goes wild! (As wild as people chose to get in 1987.) He should have never tried anything other than a front-facing two-handed dunk. 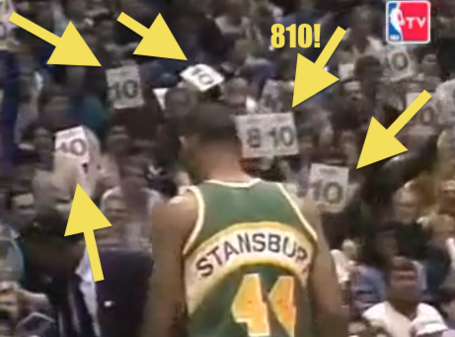 Just think how crazy people would have gone if he had the vision to throw the ball off of the backboard!

All he had to do to win was beat this: 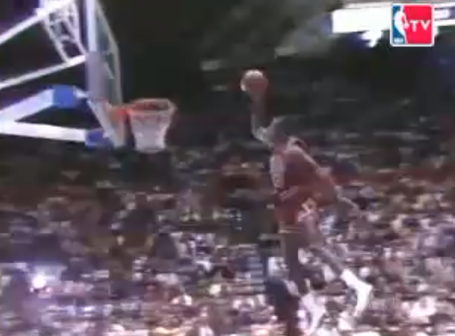 On Jordan's final dunk he needs a 46 or better to advance to the finals against Jerome Kersey. 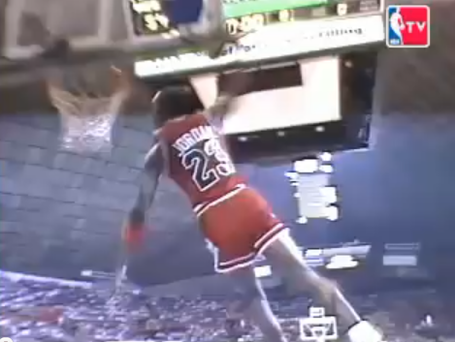 Everybody else was making dunks. Michael Jordan was making posters. Runner-up Jerome Kersey was irrelevant. Clyde Drexler was so irrelevant that nobody will ever remember that he even participated and was in the semi-finals.

Stansbury participated in three of the most memorable dunk contests in NBA history and finished on the cusp of victory each and every time. He was not Chris Anderson. He was not Darvin Ham. He may have had a very short NBA career, but he'll always have his small part of history as a legitimately good dunker that simply found himself at the right place at the wrong time.