Gary Payton And Shawn Kemp To Be Featured In 'NBA Jam'

Share All sharing options for: Gary Payton And Shawn Kemp To Be Featured In 'NBA Jam'

Sonics fans have a chance to relive the glory days when 'NBA Jam: On Fire' is released on Playstation 3 and Xbox 360 this October. EA Sports said the game will feature former Seattle Supersonics Shawn Kemp, Gary Payton and Detlef Schrempf. 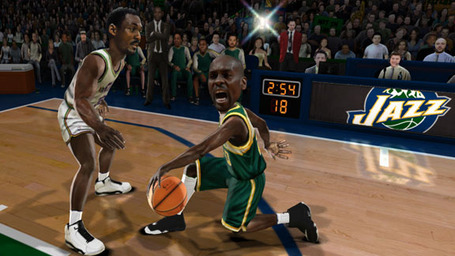 Last year's version of NBA Jam did not include the Sonics because of licensing issues according to NBA Jam's creative director Trey Smith:

This was at the top of their list, and that's a big deal to us. When we were creating 'NBA Jam: On Fire Edition' we wanted to listen to the fans, and everyone who played the game last year had one question: Where are the Sonics. (Via: ESPN)

Todd Bishop from from Seattle's GeekWire already knows what he's going to do when he plays the game for the first time:

Of course, the first thing we’re planning to do is match Payton and Kemp up against Oklahoma City on the easiest level and run up the score as high as we possibly can.