The Seattle roster for the Hoops 206 Game set for July 23 at Key Arena was announced on Tuesday, and many familiar faces from the city are represented. The game is billed as Seattle vs. The League, with players who grew up in the city set to take on others from throughout the league for a good cause. Seattle has a rich basketball culture as it is, and the NBA charity game gives fans a chance to see some of the homegrown stars that made it to the league play in front of their hometown -- a rarity since the NBA left.

A promotional poster for the game was released to the masses on Twitter. While the team representing The League hasn't been announced, the Seattle team has. Brandon Roy headlines the team, and is joined by Spencer Hawes, Jamal Crawford, Isaiah Thomas and Will Conroy. The group is a blend of generations, with some of the younger players, including Hawes and Thomas, joining Roy and Conroy, who played on some of the great Washington Huskies teams of the early 2000s.

Here is the poster for the game, tweeted by H206Game. 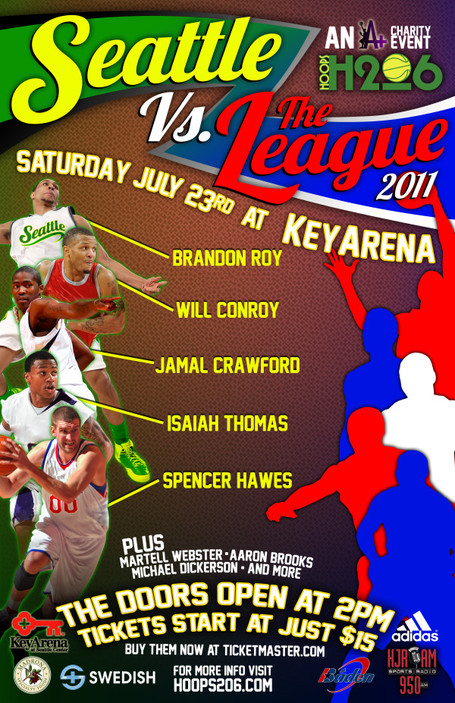 Washington State star Klay Thompson, the No. 11 overall pick in the 2011 NBA Draft, will also play in the charity game, according to the same Twitter account. As you can see above, Martell Webster, a staunch supporter of the game, Aaron Brooks and Michael Dickerson will also take part.

It's a family affair for Seattle ballers, so don't miss out on the action. For more information on tickets, check out this link.