Jon Brockman Can Be A Lumberjack During NBA Lockout

Share All sharing options for: Jon Brockman Can Be A Lumberjack During NBA Lockout

As soon as the NBA lockout was announced, #NBALockoutJobs began on Twitter. Without basketball, these superstars worth millions of dollars needed to make some kind of living, right? And because plenty of NBA players were already begging for jobs on Twitter, the world decided to help them out. It's only right that we give back to NBA superstars that have given us so much already, be it in the form of entertainment on the court or wacky antics off it.

Luckily for Jon Brockman, he's already got a job all lined up. I mean, look at him. He already looks ready to head into the mountains as a lumberjack, chopping trees with his bare hands, or perhaps an ax when he gets tired. And one intrepid Twitter user created the perfect Photoshop image for Brockman's new-found skill. 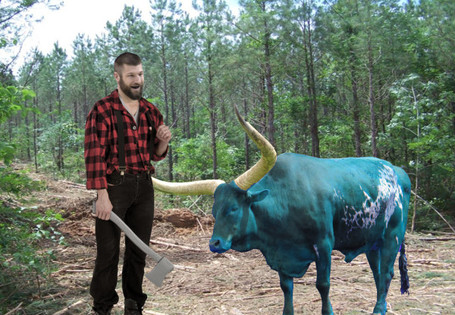 See? We can still find humor in yet another work stoppage in professional sports. Go get 'em, Jon.