Nate Robinson was traded to the Oklahoma City Thunder, or the team formerly known as the Seattle Supersonics, on Thursday in a last-minute trade deadline move that saw the Boston Celtics ship Kendrick Perkins and Robinson to the Thunder for Jeff Green and Nenad Krstic. The move came as a surprise, and disappointment, to Seattle fans, who are accustomed to shunning and generally hating the Thunder after the Sonics were shuttled away from Seattle in 2008. Now, fans will have to get used to seeing Robinson in a Thunder jersey, as painful as it may be.

Though Robinson hasn't made his debut with in Oklahoma city yet, a Photoshopped picture of him in an what will be his new jersey has. The creator, Ryan Hurst, took to Twitter to put together a smattering of different choices for Robinson and it appears he went with No. 3.

The photo is after the jump as it may be graphic to fans of Seattle sports. Try not to throw up or break anything. 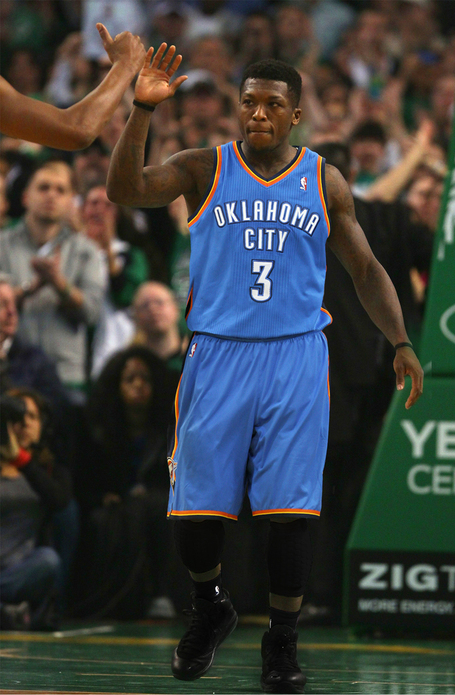 Robinson, arguably the face of Seattle basketball right now, is under contract through the end of the season, when he'll become a free agent again. Let's all just hope this is a temporary move and Robinson high-tails it out of Oklahoma City so Seattle fans can happily go back to cheering him on without feeling guilty about the name across the front of his jersey.