Seattle Mariners' No-Hitter Vs. Dodgers Was The Perfect Storm For A Sports Fan And A City

A rare feat occurs as the Mariners help a city cope and help me become a baseball fan.

Share All sharing options for: Seattle Mariners' No-Hitter Vs. Dodgers Was The Perfect Storm For A Sports Fan And A City

As of Friday afternoon, the Seattle Mariners had only thrown two no-hitters in the club's 35-year history. As of Friday afternoon, I had only attended two baseball games in the past 14 years. Yet on Friday night, worlds collided, as I attended my third baseball game since 1998 (and ironically the second in the same week), and six Mariner pitchers combined for the franchise's third-ever no-hitter.

Some baseball fans go their whole lives without witnessing a no-hitter in person, yet I stumbled into one.

Did you miss it? Maybe you had a prior engagement. Maybe you decided to go out with friends instead. Maybe, at this point, in what's seemingly another mediocre season for the Mariners, you just didn't care to watch the game on a Friday night. Maybe, you didn't watch the game and now wonder what it would've been like, as a fan, to witness something that's only happened ten times in Major League Baseball history - 13 fewer than the amount of perfect games ever thrown. Well, for posterity's sake, I wanted to sit down and share my experience with you all, because as a sports fan, this is the kind of thing that I'll never want to forget. So here is how it went down, from my perspective.

For those of you who don't know, I live in Los Angeles and jointly cover USC football in LA and Seattle sports here at SB Nation and at FieldGulls. I was in town to work Pete Carroll's Win Forever workshop and enjoy some vacation time. I flew my mom up to Seattle with me on this particular trip to show her around, and take her on a little vacation of her own to celebrate her recent birthday. I am not a "baseball guy", and I certainly wasn't planning on witnessing history (I mean, it's still the Mariners). My mom thought going to an M's game would be a fun thing to do since the team she grew up rooting for, the LA Dodgers, happened to be in town. I had never been to Safeco Field, and a couple of friends had talked about wanting to hit up a game together while I was in town, so I agreed going to the game would be a fun outing.

Thursday afternoon I started to look around for a good deal on tickets - I didn't wanna break the bank, but I wanted decent seats. My search didn't turn up anything to get excited about, unless you're excited about overpriced duckets. So I opted for cheap seats with a view - 1st base side, upper-deck, section 316, slightly overpriced in my opinion, but offer a fabulous view of the Seattle skyline. Davis Hsu from FieldGulls.com, Daniel Hill from here at SBN Seattle, myself and my mom were all set for a night at the ballpark. 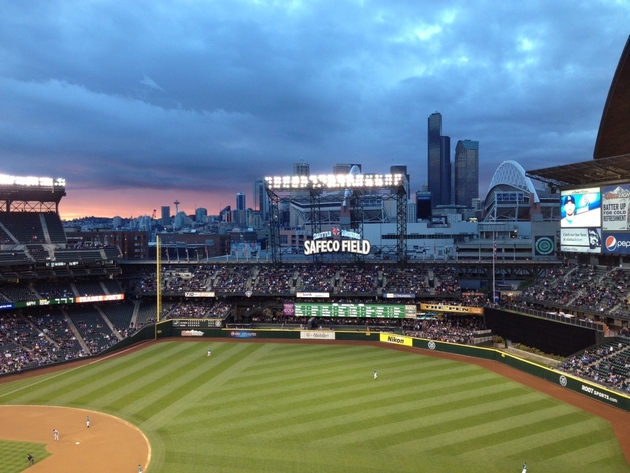 Shortly after our tickets had been purchased I got a text from my buddy, 950 KJR's Dave "Softy" Mahler asking me if I still was looking for tickets to the game, and if I wanted his. He was going to a Seahawks event at the VMAC and wouldn't be using them, so without hesitation, I jumped at his offer. That freed up 2 of our already-purchased tickets, which Daniel ended up using to bring his two brothers.

Daniel works as an intern at 710ESPN, so he would be coming to the game straight from work, his brothers would have to meet him there. So Davis, my mom and I carpooled to the game. Davis had been to plenty of games at Safeco and was a quasi-tour guide, which made for a cool experience. We walked the concourse before the game to see the different views from around the stadium, check out the food choices and, of course, see the Dave Niehaus statue. I wanted to embrace the vibe of a game in Seattle, so I was hunting for a local treat - a cream cheese hotdog. I never found one inside the ballpark. Garlic fries would have to do.

Food in hand, it was time for a game. Davis was able to sneak down to the seats Softy had given to Mom and I (sorry Safeco ushers).

The first few innings flew by, my kind of game!! Then, in the top of the 5th inning something happened.

Davis leans over, and says, "Dude, at what point do we start talking about a no-hitter?"

Naturally, I look up, and see zeros across the board. Kevin Millwood had been quietly pitching a gem. We conclude that we have passed the half-way point in a game, and therefore, thinking 'no-hitter" is allowed.

During the middle of the 5th, Davis and I got up to meet up with KJR's Curtis Crabtree. Curtis and I had been trying to connect at VMAC the day before, but weren't able to. We chatted during the bottom of the 5th about the possibility of a no-hitter happening and our skepticism that Millwood had enough in the tank to pull one off. I headed back to the seats, Davis went up to sit with Daniel for a bit, and by the time by butt hit the chair Millwood had left the game with a groin injury.

No-hitter still intact, but not much hope it would be maintained by the bullpen - not because we weren't trusting the bullpen, just because combined no-hitters are so rare. Before Friday night, there had only been nine in MLB history.

In fact, According to estimations by James Santelli, a numbers-whiz who covers the Pittsburgh Pirates (among other things), the odds of someone seeing a combined no-hitter in their first trip to a ball park (let alone in as few games as I have attended altogether) are about 2/10 of one percent. The numbers weren't on my side.

Another reason there wasn't a palpable "no-hitter buzz" is that the M's still hadn't scored a run. A guy behind me wondered aloud, "Is it possible to no-hit a team and still lose?"

Then, in the bottom of the 7th, Kyle Seager knocked in Ichiro Suzuki with an RBI single and the Mariners took a 1-0 lead.

With the inning still alive, Softy jumps on twitter and asks for an update on the M's game. He gets word that there is a no-hitter in the works, and having never witnessed one in person, immediately leaves the Seahawks' facility in Renton and heads to Safeco.

Had the Mariners not used so many pitchers, I am not sure he makes it in time. But thanks to all the pitching changes, Softy is in the building before the 8th inning ends. He shoots me a text asking if I am still at the game (of course I am, I love baseball remember?). I tell him yes, and that there are seats next to us open. I also text Davis to come back down and to bring Daniel down. The stadium had an nervous-energy I can't explain, the Mariners were at bat, and 3 Dodger outs away from the-feat-that-is-supposed-to-remain-nameless at this point in a game.

With one out left in the 8th, Davis and Daniel hurry excitedly down the aisle, not even knowing Softy, who must have set world records for driving speed to get here, is a step behind them. Softy, in that familiar voice yells over the noise of the crowd, "Scotty, still got another seat?", and joins us in the row. The inning ends and it's time for history to be made.

After the Dodgers' first out, we start imploring everyone around us to get on their feet and get loud. I don't know what was going on in other sections, I was too focused on our own to pay attention, but I can tell you that section 118 was up and cheering.

We are high-fiving, bumping fists, taking cell phone pictures and taking in the moment. The M's are celebrating awkwardly on the field.

As we celebrate in our seats, we discuss the standout plays - the fly-ball catch and diving throw by Chone Figgins, the throw by Brendan Ryan after Dee Gordon's bunt to save the no-no, League's strong showing after his recent demotion, and more.

On the ride home, it dawns on me - on a week when Seattle is mourning the fact its former NBA team secured an NBA Finals berth, its young and promising baseball team gives them something to enjoy.

This wasn't just an incredble sporting experience to tell my grandchildren about someday, it was also the perfect sports-medicine for a city, at the perfect time.

Oh, and it just might have made a baseball fan out of me. 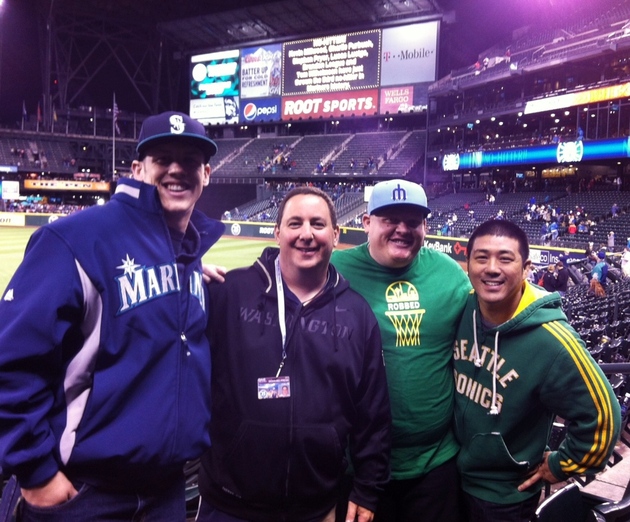 Hill, Softy, myself, and Hsu.

For more great Mariners coverage and discussion be sure to head over to Lookout Landing.

Seattle Mariners' No-Hitter Vs. Dodgers Was The Perfect Storm For A Sports Fan And A City