I love fantasy baseball. Seriously love it. And I love it for all the same reasons I hate, HATE, fantasy football. It requires everyday attention, luck plays very little a role in it, you can't learn everything you need to know from spending five bucks on a magazine,and it features the greatest sport on Earth. Unlike football, where some douche who spent your entire draft drywashing his fat little fingers over Aaron Rodgers ran away with your league despite logging in only on Saturday nights, carrying two kickers all year, and consistently playing guys during their bye weeks.

Fantasy Baseball is hard, demands commitment to survive, and gets under your skin. Only something so wonderful could actually make you stay inside on an August day and seriously ponder the relative merits of Wandy Rodriguez (ugh, but he's on the road) and Derek Holland (ugh, but he's at home).

So why then, am I here, burying the lead three paragraphs deep? I've had some pretty good fantasy baseball teams, and I'm willing to share my strategies (and mistakes). Here are some of my, ... bona fides, if you will:

This was the Yahoo Global Leaderboard last summer. I was top three for about four months, #1 for a month, and generally dominant. I was...what, not enough for you? Well then: 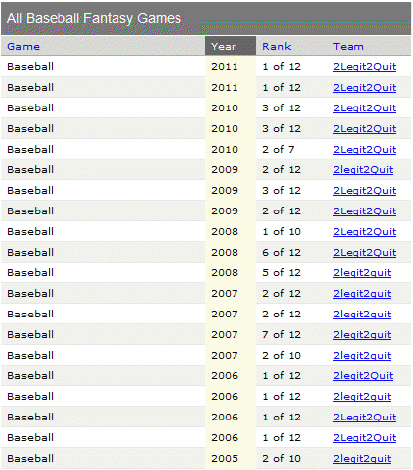 That a list of all my teams from the last seven years. I finished out of the money only three times during that stretch, and find a way to challenge every year.

So I'm hoping to drop by frequently and talk about fantasy baseball, and whenever possible, from a Mariner-centric point of view. Let's get started by talking about draft strategy.

If you're lucky enough to catch this before your league drafts - then, you're welcome. If I'm a little late on the uptake, use this for future pickups and waiver claims. There are more fantasy baseball draft strategies then one safely could, or should, shake tree remnants at. And those who tout their "guaranteed" elixir for success end up sounding like infomercial pitchmen.

It makes salsa, smoothies, dips and it never takes a pitcher till the 9th! Buy this rare double sided Bald Eagle coin now, before it's lost forever to positional scarcity!

I seek two simple things during a draft. First, target players who contribute in multiple categories regardless of position; and second, seek value when selecting pitchers.

This seems so simple, yet is often disregarded in favor of positional scarcity or some other inane reason. What I want on my team is overlapping categorical contributions. Put another way, what I want is less "I'll get my homers from these three, my runs from these four, my wins from these three...." and as many 95/20/90/20/.290 guys as I can
get my hands on. I make a worksheet for this, listing out all ten categories, five on each side.

Each time I draft a guy who I project to exceed that threshold, I put a check next to the box. I prioritize guys who contribute in more then one category. This is why I never draft a catcher early, or a SS. I'll never take someone like Tulo (even if I think he's dreamy, which I do) and his stellar three categories from a SS over Braun or Kemp, legit
5 category guys albeit at a very deep position. This enables me to pack statistics. That's what I want. I only pay minor attention to position, especially early in the draft. If I end up too deep in the OF or at 1B, trades can be made or waiver wires can be vultured.

As an added bonus, this provides tremendous roster flexibility. By spreading out the contributions and not relying heavily on a only a few guys in each category, injuries can be managed better, one dimensional players can be easily inserted late in the season to try and win a couple more points, and you can be more creative in the trade market.

A huge question in any draft is when to start taking pitchers. The best starter will only contribute in four categories, so as you can probably guess, I prioritize hitters first. But I don't believe in the extremes, like never touching a pitcher until late, or ensuring certain positions are drafted first. I believe in letting the pitchers come to me.

Good pitchers inevitably fall. That's because there are more good pitchers (fantasy-wise) than good hitters, hitters are a bit sexier (let's be real, everyone digs the long ball), and pitchers carry more injury risk. Even so, eventually, all the good four-category hitters will be gone, and lo and behold, four-category pitchers will be all over the place. And who will your competitors who took the Jeters', Rollins', and Ugglas' be targeting?

They will be taking wound-covering OFs to shore up their averages. What about those guys who took two pitchers in the first 4 rounds? Well, they'll have two good pitchers and Andre Ethier will be their third best hitter.

In the mean time, you get to scoop up players 95% as good as players taken before but without opening craters on your roster.

I played in a good league last year where several guys went positional scarcity or scooped up aces early. I waited, and in the sixth, with five good hitters on board, I took Hamels with other took guys like Prado and Drew. In the seventh I got Greinke while others had to grab Werth or Gardner to be their 2nd OFs.

Good pitchers fall. It happens every year. Having Roy Halladay is awesome. But he goes around the same spot as Dustin Pedroia, a good candidate for 5 categories. So in the second round, the scrappy second basemen may give ten inches to Doc, but is the better value for your team.

What do you guys think? What works for you? Any success/horror stories from this year to share?

For more on Fantasy Baseball, make sure you head to SB Nation's Fantasy Sports Hub, Fake Teams. For more on the Mariners, stick with us here at SB Nation Seattle in our Mariners' 2012 Season StoryStream or head to Lookout Landing.