Back in June it was announced that former Mariner Chris Ray was teaming up with Fremont Brewing to produce Homefront IPA. The beer was to be sold at Safeco as well as in limited quantities in bottle shops and other retail locations with the proceeds going to Operation Homefront, and organization dedicated to providing emergency assistance to military families in need. Ray might not be a Mariner any longer, but this was still a cool idea that helps to support a noble cause so when I came across a display at my local bottle shop this weekend I was almost obligated to pick up a bomber for myself. So, how is it? 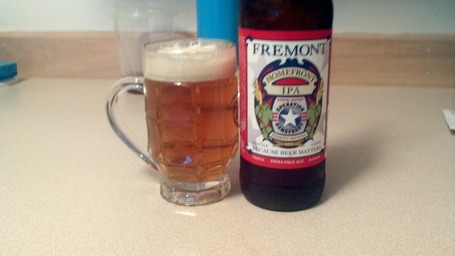 Homefront IPA is a very nice, crisp summer IPA brewed with orange zest that really accentuates the citrus notes of what tastes to me like Chinook hops. It pours a nice golden color with a pillowy white head and there are strong notes of orange and bread in the aroma. The initial flavor is very strong citrus, but as opposed to a lot of Northwest IPAs that fades into a tasty, light malt backbone with notes of honey along the way to an almost cracker-like finish. One of the more talked about quirks of this collaboration was the use of Louisville Slugger bats in the aging process and while I did detect a very faint wood flavor, it's entirely possible that the power of suggestion was at work.

In all, this is a really very strong effort. Standing out from a crowded field of Northwest IPAs is no simple task and this particular effort does so. More than anything I was impressed by the ability of Ray and the folks at Fremont in using orange zest to somewhat counter-intuitively tame the citrus notes of the hops, something I wish more brewers of the style in this corner of the world could manage to pull off a bit more often.

Well done Chris. Here's a toast to getting healthy and getting your career back on track, and here's another to a second career when it comes time to hang up the spikes.