Mike Sweeney is at the ballpark on Thursday night, rubbing elbows with old friends and teammates ahead of the matchup between the Seattle Mariners and Los Angeles Angels of Anaheim. That Sweeney is at the ballpark is not particularly noteworthy; he's spreading cheer and reminiscing with friends on both sides of the field. He even stopped by for a chat with Kyle Seager, the newest Mariner.

But what did catch my eye was the following photo of Russell Branyan and Sweeney, passed along by Shannon Drayer. 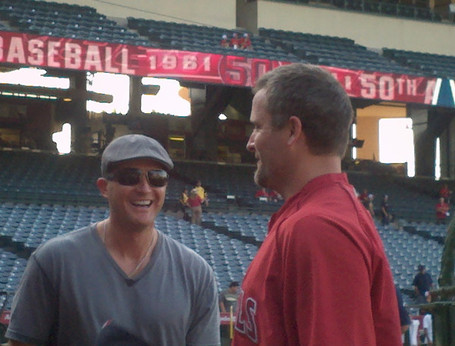 What in the world, Mike? In this photo you'll notice his fun sense of fashion. The big smile is accompanied by aviator glasses and a v-neck shirt, as well as the headgear he's wearing. But the topper -- the absolute best part of Sweeney's choice of wardrobe -- has to be the fact his shirt matches his hat to perfection. You just don't see that kind of planning these days and it's clear Sweeney takes his apparel seriously.