Doug Fister and the Seattle Mariners may end up losing Saturday night's game due to a fluke error that was completely the fault of the umpire. In the fifth inning, Cameron Maybin drew a walk before eventually coming around to score. But there was a problem: It wasn't a walk at all. Instead, Maybin only took three balls, yet was somehow given a free pass to first base by the home plate umpire.

Here's what MLB Gameday looked like. Notice the blank pitch for the fourth ball. That pitch never actually happened, a fact confirmed by the replay on ROOT Sports. 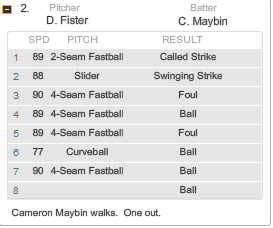 The weirdest thing about the whole situation is that nobody noticed it or questioned it. Not Eric Wedge, not Fister, not Olivo and not anybody on the bench. The scoreboard even listed the pitch count as 3-2 after the ball that sent Maybin to first.

Fister is dealing, but he's going to end up getting screwed it looks like, and it's unbelievable. How an umpire issues a walk after just three balls is beyond me, but it's a situation that should've never happened. And I'd hope the MLB takes a look at the "walk" after the game, though there's no way to make it right.