MLB Network decided to dramatize what would happen if a bullpen member at Wrigley Field refused to move out of the way of a left fielder chasing a foul ball. It began with a clip of a member of the Chicago Cubs bullpen standing his ground, refusing to get out of the way as the Colorado Rockies left fielder gave chase a flyball into foul territory. But MLB Network took it a step further, showing what would happen if Eric Byrnes was the left field and Harold Reynolds was the pitcher relaxing in the open bullpen, oblivious to the situation around him.

Byrnes clearly marches to the beat of his own drum and happily took the opportunity to blast Reynolds off a Gatorade jug at full-force.

Let's remember who we're talking about here. This is Eric Byrnes, the source of endless entertainment in the field and high-comedy off it. His time with the Seattle Mariners was short, but full of hilarity, sometimes of the painful variety. Remember this? 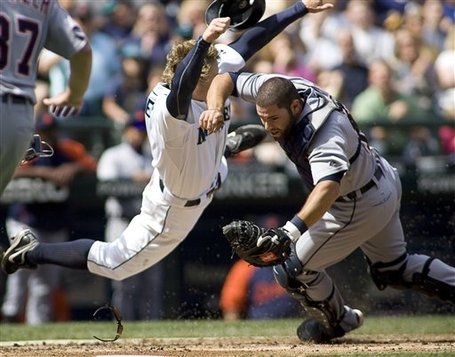 And while this wasn't with the Mariners, I think we all remember this gem, which I like to call "dog who lost his bone under the couch."

And finally, there was Eric Byrnes exit. He pedaled off into the sunset, never to be seen again before turning up on MLB Network, dropped like a gift from above to lay-out Harold Reynolds.

When Eric Byrnes and Harold Reynolds collide, let's remember that we're all winners in this game called life.