The Seattle Mariners have embraced their inner Larry Bernandez with a little help from Jack Wilson. According to Ryan Divish, reporter extraordinaire for the Tacoma News Tribune, Wilson bought Bernandez shirts for each and every Mariner. 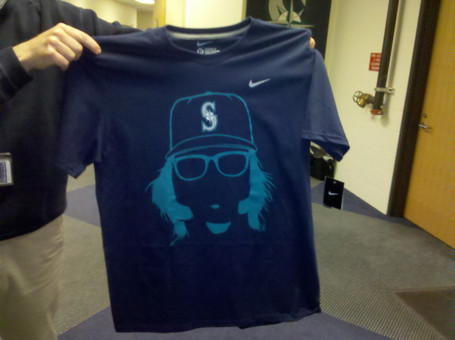 Where, oh where, have I seen these before. Oh, that's right! Seth Kolloen made Larry Bernandez shirts a few months ago. Personally, I like the design he came up with better -- there's a bit more detail and the old-school Mariners hat is featured.

We can probably expect to see quite a few players strolling around with Bernandez on their chest from now on, and I'd expect these shirts to be on the backs of fans on the double. Between Larry Bernandez bobblehead night -- yes, it is happening, thanks to the voice of the fans on Twitter -- and these shirts, the Mariners seem to have adopted Felix Hernandez's lovable alter-ego as a mascot this year.