Brendan Ryan Is The Most Stereotypical Baseball Player Ever

Share All sharing options for: Brendan Ryan Is The Most Stereotypical Baseball Player Ever

Listening to Brendan Ryan speak on the Seattle Mariners postgame show on Friday night, I noted he was the most stereotypical baseball player I'd seen in a long time. That's not a bad thing at all, and Ryan has embraced his own quirkiness while becoming almost a parody of a baseball player you'd see in movies. Everything about him just oozes baseball. If you saw him on the street or listened to him talk, you'd probably think "baseball player."

Look closely at what Ryan's become. His mustache has taken on a life of its own, and closely resembles the excellent facial hair of his manager, Eric Wedge. Also note the gold chain, the arm bands and the high socks. Not pictured, but usually worn: Heavy eye black. 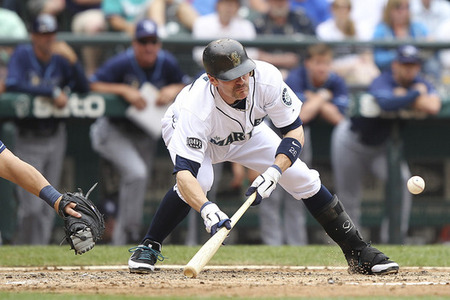 But it's not just his appearance that makes him the most baseball player ever. Listen to him talk after games and during interviews. Everything about the way he speaks says "baseball." He uses nicknames liberally and sounds like he's just hangin' in the clubhouse with the bros. Chone Figgins is Figgy, Ichiro is Ichi, Miguel Olivo is Miggy and Eric Wedge is ... well you get the picture.

Ryan effortless rattles off baseball vernacular as if he's a living, breathing baseball dictionary. Singles, doubles, triples, etc. are language of the common man; Ryan would rather call them base knocks and dingers (he didn't actually use the word dingers, but I was waiting for it).

Brendan Ryan is probably the most baseball player I could ever think of. And he's pretty awesome, as well.