Safeco Field was invaded by an onslaught of streakers withing a short period of time on Saturday night. While it's mind-boggling to me that a bunch fans would invade the field in rapid successions late in a tie ballgame, Seattle did draw national attention for its streakers. So that's something.

All four streakers were apprehended in short order, including the naked guy tackled in the infield that drew the most headlines. It got to a point where security was laying hits that would make James Harrison blush, but it's the price a streaker pays for running onto the field as the Seattle Mariners are trying to put down the New York Yankees (Spoiler: Mariners won!).

One intrepid fan had a whiteboard with him and when combined with his quick wit, a hilarious sign was born. Behold, the sign of the night, which takes a stab at streakers and Alex Rodriguez (via Dave Mahler) 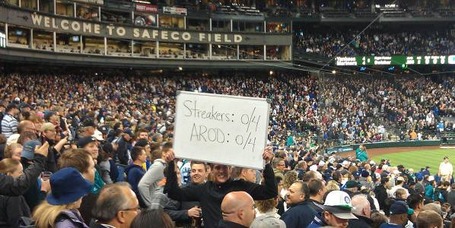