The Seattle Mariners have been unable to lure fans out to Safeco Field this year and the attendance situation has reached depressing levels. Just a few weeks into the season, new record lows for attendance have already been set, with cold weather, weeknight starts and poor baseball taking its toll. On Monday night, as the Mariners host the Detroit Tigers, the stands were just about as empty as could be at Safeco.

This is a picture taken somewhere behind home plate just five minutes before the game (via Darren Rovell on Twitter). 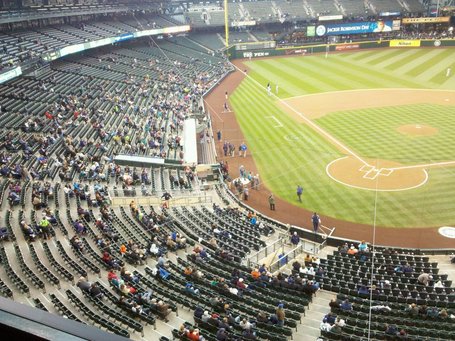 With the bar for futility currently set at 12,407 -- a mark "achieved" last Wednesday -- it's looking like tonight may be a new record. There can't be more than a few thousand fans at Safeco, though this is just a small sampling of the entire ballpark. However, these are seats typically filled, yet on Monday, they sit empty.

We can blame the poor weather and the cold, but there's no excuse. Apathy has already set in after fans have been beaten down by losing baseball and poor performances. With the rising cost of attending a game, along with the rising costs of everything else in life, it's clear baseball is an expense ripe to be cut by many -- especially when the Mariners continue to lose.

It doesn't make it any less depressing, though.