Seattle's Floating Stadium And What Could Have Been

Share All sharing options for: Seattle's Floating Stadium And What Could Have Been

On Wednesday, Slate put together a slideshow howcasing some of the stadium ideas in the United States that never came to fruition. Seattle is represented on the list with a stadium I'd never heard about -- it was well before I was born. Before the Kingdome and Safeco Field, the idea of a floating stadium was, um, floated to the city in attempt to lure a professional team to the area.

Check out the artist's rendition of the stadium. It's truly an incredible idea, to say the least. 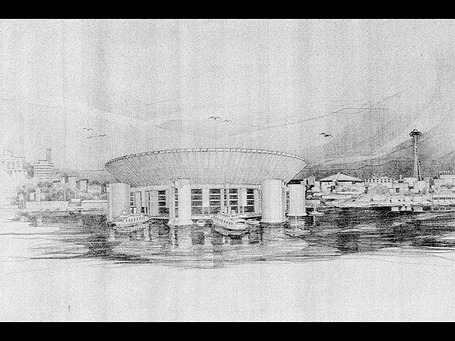 Sports Illustrated laid out the details of the stadium, including the logistics of it all. Think Husky Stadium boat parking, but to the extreme. There's nothing quite like a stadium sitting on Elliot Bay that can hold 60,000 people for baseball and a whopping 70,000 for football.

A roll-away dome top would shelter the crowds during the rainy spells that Seattle endures in late autumn. The stadium would rest on concrete pontoons that would utilize variable ballast to hold the structure absolutely level, even in a windstorm. A breakwater would shelter it from waves. There would be a marina for boats, so that fans could sail to the games, but even that is no special novelty in Seattle, many of whose residents sail to University of Washington football games.

A retractable roof, floating stadium sounds like the most amazing idea ever. Sadly, the stadium idea died and the Kingdome was built for the expansion Seattle Mariners, giving way to Safeco Field just before the turn of the century.

As much as I loved the Kingdome -- simply because of the memories that took place there -- a floating stadium would've been the greatest thing even for 10-year-old me. I'm almost disappointed the idea never went through, robbing us of the chance to boast our one-of-a-kind stadium. The Space Needle and a floating park built within years of each other? Seattle would've been the coolest kids on the block.

Maybe next time a new stadium is needed it'll be built on water. We can only hope.