Paul Caputo released his baseball rooting interest flow chart into the wild, giving undecided fans an easy way to pick a team while playing off some of the stereotypes Major League Baseball teams have. The chart incorporates plenty of inside jokes, taking stabs at the New York Yankees, Boston Red Sox and, yes, even the Seattle Mariners. 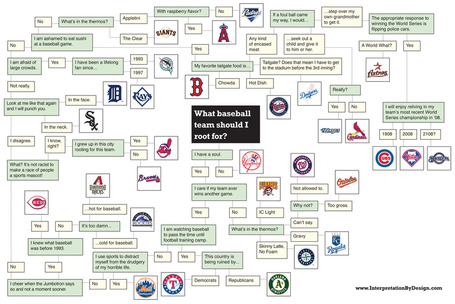 via Jeff Sullivan at SB Nation

Now follow the path to the Seattle Mariners. Good news! We, as Mariners' fans, have a soul, unlike a certain team from the Bronx. The path is as follows:

Has soul, doesn't care if team wins another game, skinny latte with no foam in the thermos. Fits perfect, right? Exactly.

The chart includes jabs at the Red Sox (Chowda!), Houston Astros (What's a World Series?), Chicago Cubs (1908 will never die) and more. The San Francisco Giants, with "The Clear" in the thermos, may be the best of the bunch, though. In all, it's an excellent exercise, simply for the comedic value of it all.