Share All sharing options for: PHOTO: Felix Hernandez And His Cy Young Award

Even though it was announced months ago, Felix Hernandez's Cy Young Award seems real now. That's because King Felix was in New York today with Roy Halladay, winner of the NL Cy Young Award, to receive the award itself. The Baseball Writers Association of America announced Felix as its AL Cy Young Award winner back in November.

Here's the award, presented to Felix on Saturday, courtesy of TheRealMariners Twitter account. Click the picture to enlarge to see the Cy Young in all its glory. 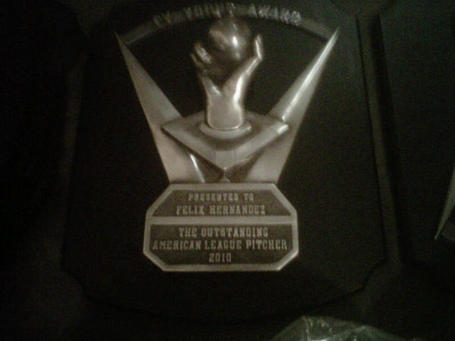 See? Doesn't it all feel a little more real now? After the jump, a picture of the two aces and their awards, with another Mariners' connection. 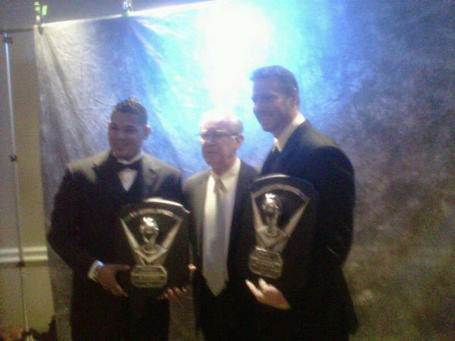 It's a bit fuzzy, but that's Hernandez, Halladay and Bob Engle. Halladay and Hernandez were both signed by Engle, bringing the total number of Cy Young Award winners he's responsible for in some way to four. In his final season as assistant scouting director in Toronto, the Jays chose Halladay with the 17th pick in the draft. The award was Halladay's second, the first of which came in 2003.

In Seattle, Engle and his team signed Hernandez in 2002. Hernandez was 16 at the time and has grown into what we all hoped he would as a pitcher. The Cy Young was a cherry on top for Hernandez, who was dominant despite anemic run support in 2010.

Congratulations to Hernandez and Halladay on their Cy Young Awards.