Share All sharing options for: Robert Garrigus' Putter May Have Been Stolen From A Child At 2011 US Open

The juxtaposition of Robert Garrigus' game and how he putts is enough to inspire a chuckle from anyone. Garrigus is one of the longest hitters on the PGA Tour, routinely bombing the ball out beyond 300 yards and putting himself in the company of Bubba Watson. But when he gets to the green, Garrigus pulls a wee little putter from his bag, leans over at almost a 90-degree angle and goes to work. It's on display at the 2011 US Open, and the jokes are flowing fast and furious.

After the jump, a shot of Garrigus' 28-inch putter that illustrates just how odd the sight is. 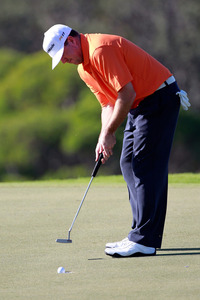 A putter shaft is typically around 35 or 36 inches, making Garrigus' choice a break from the norm. A 28 inch putter is about what you'd expect to see a 10-year-old use, and is probably about the size of Tiger Woods' driver as a three-year-old.

But it's hard to knock the man when he's in the top-5 at the US Open and playing well. If he's still in contention on Sunday and keeps getting the air-time he has been so far, expect the jokes to keep coming. He'll be laughing all the way to the bank with his putter that looks like it belongs on a mini-golf course, not the US Open.

2011 US Open Leaderboard: Robert Garrigus Finishes At 6-Under