Remember last year when Fred Couples showed up at Augusta National with what looked to be skate shoes? The audacity of Couples, who spurned traditional golf shoes and wore some new-fangled creation drew major attention as fans tried to figure out what, exactly, he was wearing. The shoes were a new creation from Ecco, a spikeless golf shoe Couples said eased pain on his famously balky back. They appeared to be little more than street shoes, but actually provided similar traction to golf shoes, all without the long spikes. And with Couples charging up the leaderboard, the shoes garnered major attention.

Here's a look at Couples' shoes, which utilize tiny rubber spikes to keep traction. Click the image to enlarge (via Golf365). 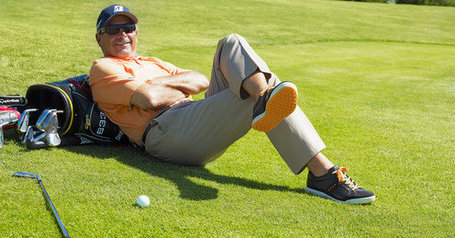 It's funny to see Couples and fellow Washington native Ryan Moore as the only two golfers at The Masters in spikeless shoes. Couples is wearing Ecco shoes again while Moore -- who has famously shied away from sponsorship deals, allowing him to pick and choose gear -- designed his own with help from True Linkswear. You can find more about the shoes Couples and Moore are wearing at The Masters here.

Couples is back near the top of the leaderboard again this year after a second round 68, putting him at 5-under for the tournament. It means major coverage for his sponsors, and more attention on those new-fangled shoes