The Masters Menu A Throwback, With Prices Worthy Of Decades Past

Share All sharing options for: The Masters Menu A Throwback, With Prices Worthy Of Decades Past

Forget $10 beers and snacks that cost a fortune. This is what the menu for this week's Masters Tournament looks like (via Darren Rovell). 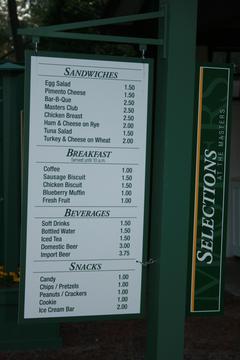 When we say Augusta National sticks with tradition and spurns modernization, we mean it. Fans at The Masters are called patrons, cell phones are banned on the course -- phones must be turned off; if they ring or vibrate, the offender is sent packing -- and running is not allowed. But one nice tradition is the menu at Augusta Nation, which features signature sandwiches -- the pimento cheese is infamous -- and prices that won't leave patrons smarting.