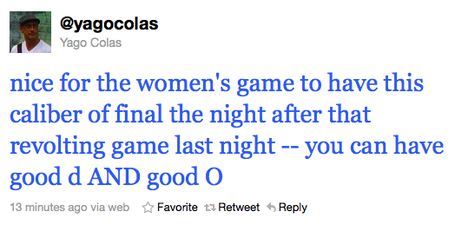 Occasionally a game will come along that almost makes you fall in love with the game of basketball all over again by reminding just how emotionally engaged you can become in two teams with which you have no strong history, positive or negative.

It's really hard for me to imagine any basketball fan watching this game and not coming away thinking that most of what they've heard or thought about women's basketball over the years was either flat wrong or full of faulty logic.

It's hard to imagine a basketball game offering more excitement, big plays, and stars stepping up at big moments than the Texas A&M Aggies' 76-70 win over the Notre Dame Fighting Irish just did.

While people are naturally going to focus on the outstanding play of TAMU forward Danielle Adams and Notre Dame point guard Skylar Diggins, this game was ultimately decided over and over again by big plays by the "other" players.

With 1:07 left in the game TAMU wing Tyra White hit a 3-point shot to extend the lead to five with the shot clock running down. It that might have been considered shocking if she hadn't hit so many great shots throughout this Final Four and she showed once again why TAMU coach Gary Blair spends so much time harping on the team over individual concept in press conferences with two more clutch free throws with 19 seconds left that essentially sealed Texas A&M's first women's basketball national championship.

While White finished with 18 points, five rebounds, and four assists, Danielle Adams showed why she's so highly regarded using her combination of power, nimble feet, and soft touch in the post to lead TAMU with 22 of her 28 points in the second half and taking over down the stretch despite clearly suffering some pain in her left arm. Her play in the post helped TAMU shoot a scorching 68.2 percent in the second half.

But that's before even getting to the gutsy performance by Notre Dame who got themselves back into this game after taking a major hit early and looking like they'd be off their rhythm, but the rallied as a team as well with Diggins leading the way with 23 points, but Devereaux Peters stepping up with a double-double of 21 points and 11 rebounds and Natalie Novosel finishing with 14 points and four rebounds.

That was a game that was exactly as advertised, even if there was some fear of disappointment in the mainstream - two teams that played outstanding defense against outstanding offenses and literally fought to the very end.

And it was exactly what you want to see in a title game in any sport.