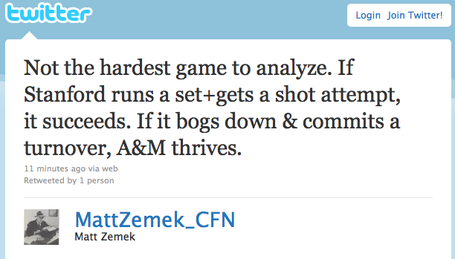 There are a lot of potential story lines that might stand out in this game from Stanford Cardinal point guard Jeanette Pohlen's five turnovers against the Texas A&M Aggies' pressure to the Aggies early venture into the bonus, but there is at least one other x-factor that has had a major impact on the flow of this game.

Stanford has made uncharacteristically slow rotations against Texas A&M's ball reversals and drives to the basket on a number of occasions that has led to giving up both points and offensive rebounds that nobody seemed to be paying attention to on occasion. When they returned to playing a man-to-man defense as a cohesive unit, they stopped TAMU cold and went on a 9 to 2 run to finish the half.

This game is indeed simple: Stanford can afford turnovers against TAMU's pressure if they make up for that by getting a good look in the post with the opportunity for an offensive rebound, a battle that they have won by getting 43 percent compared to TAMU's 30 percent. But on the other end, they also have to turn TAMU into a team that feels forced into settling for jump shots instead of driving the ball to the basket they could have an even better defensive result than they had in the first half: TAMU is currently shooting 3-for-10 from the 3-point line and 30 percent overall.

Tyra White has led the way with seven points for TAMU, both driving to the basket and picking up two offensive rebounds without being boxed out and the ball bouncing on the ground while Danielle Adams has a team-high four rebounds and five points.

For Stanford, what stands out is Nneka Ogwumike's 16 points and six rebounds, but Kayla Pedersen's four blocks also demand attention - when Stanford was at their best defensively, Pedersen was in perfect position to block would be drivers instead of scrambling to recover.