Gonzaga and Saint Mary's survived and advanced in the WCC Tournament, setting up a rematch between the conference's top-two teams with an automatic NCAA Tournament bid on the line. Gonzaga caught a break on Sunday night, taking advantage of a Chris Webber moment by the San Francisco Dons in the waning seconds on the WCC semifinals. Without a timeout, San Francisco stole the inbounds pass down three, but called a frantic timeout in the scrum, giving Gonzaga two technical foul free throws. The Bulldogs survived, advancing to the finals with a 71-67 win.

Saint Mary's made it to the finals in less dramatic fashion, pulling away in the second half to drop Santa Clara, 73-64. Both Gonzaga and Saint Mary's were given a free pass to the semifinals after finishing first and second in the conference during the regular season.

Gonzaga and Saint Mary's split the regular season series in hard-fought matchups. The first time around, Saint Mary's stole a win in Spokane, squeaking out a two-point win after Mickey McConnell drilled a contested shot just before the buzzer at The Kennel. Gonzaga got its revenge on the Gaels home court, snatching away a 89-85 overtime win.

The rubber match comes with higher stakes as Gonzaga and Saint Mary's do battle with a spot in the NCAA Tournament on the line.

Here's a look at the final bracket. 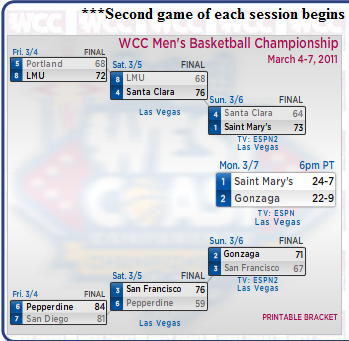