Here's the full schedule, TV information and bracket for the 2011 WCC tournament.

Schedule: Like the rest of the tournament, games will be played in prime-time on the West Coast. The first semifinal begins at 5 p.m., followed by the last game of the day at 7:30 p.m., or half an hour after the first game ends.

TV information: ESPN2 has both broadcasts, coming to you live from Las Vegas. Coverage begins at 5 p.m. as St. Mary's takes on Santa Clara in the first semifinal 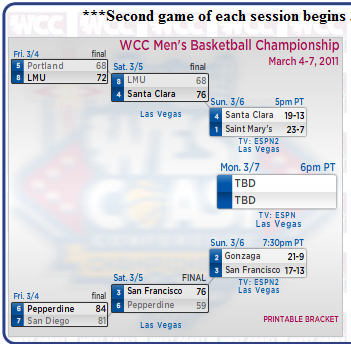 Gonzaga finally joins the fun on Sunday as they take on the San Francisco Dons. The two teams split the season series, with San Francisco winning on its home court in overtime before Gonzaga won in The Kennel, 70-53. The stakes are higher in the rubber match, with a berth in the WCC finals and a shot at an automatic NCAA tournament bid on the line.