The first round is in the books in Las Vegas as the 2011 WCC Tournament gets serious with the start of the quarterfinals on Saturday night. On Friday, Loyola Marymount pulled off the upset in the first round, dropping Portland, 72-68. On the other side of the bracket, Pepperdine took care of business, holding off the San Diego Toreros down the stretch in a 84-81 win. The Waves and Lions move on to face San Francisco and Santa Clara, respectively, in Saturday's quarterfinal round. The Dons and Broncos each had a first-round bye.

Here's the schedule and bracket after Friday's games.

Schedule: Loyola Marymount and Santa Clara get the action started at 6 p.m. In the late-night game, San Francisco and Pepperdine square-off, with the winner facing the Gonzaga Bulldogs on Sunday.

Teams remaining: Loyola Marymount, Santa Clara, Pepperdine and San Francisco play today as the WCC field continues to narrow ahead of Monday's finals. Gonzaga and Saint Mary's each have byes, and will join the tournament in the semifinal round on Sunday. 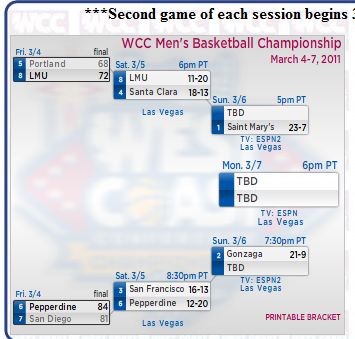