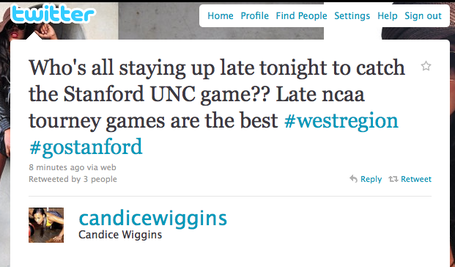 The Stanford Cardinal will play a late game against the North Carolina Tar Heels at 8:30 p.m. PST on ESPN.

Earlier in the week, there might have been concerns about the Stanford Cardinal's health with two freshmen rotation players dinged up.

However, after some precautionary measures Stanford appears to have a clean enough bill of health, as described previously by SBN's Swish Appeal.

Stanford Women's Basketball Team's Got Bounce - Swish Appeal
Chiney Ogwumike injured her left (non-shooting hand) pinkie (got dislocated in Monday's game) and was back to practice on Wednesday. Toni Kokenis is listed with an ankle injury and is being kept out of practice but expected to play on Saturday.

As North Carolina showed against Gonzaga in the first round of last year's tournament, they are a big team but they love to run and they have the depth to do so.

NCAA Women's Tournament 2011: Can UNC's "Fun Basketball" Take Down Stanford? - Swish Appeal
This edition of the North Carolina women's team is tailor made for Coach Hatchell's style of play. DeGraffenreid puts the throttle down, with Lucas as an outstanding three point threat. Breland is a strong inside/outside presence, and there is size and rebounding in Chay Shegog and Waltiea Rolle. Tierra Ruffin-Pratt plays aggressive shut down defense. Nine players play at least 15 minutes per game on the team.

Although people continue to think of Stanford as a deliberate, plodding team that would be hesitant to get in a track meet with a team like UNC that likes to force turnovers and push the tempo, reality is that Stanford has shown the ability to run with teams this season and they also have depth and versatility to keep rotating people in and out.

The big question for UNC will be how they contend with Stanford on the offensive boards - while the two teams rebounded at an equal percentage entering the tournament, UNC has allowed their opponents more opportunities a game which they'll have to figure out to win.

For more on North Carolina, see Swish Appeal's interview with UNC coach Sylvia Hatchell. For more on Stanford, check out why Jeanette Pohlen is so important to Stanford.