Gonzaga Basketball Recruiting: 'Mark Few Hit This One Out Of The Park'

Share All sharing options for: Gonzaga Basketball Recruiting: 'Mark Few Hit This One Out Of The Park' 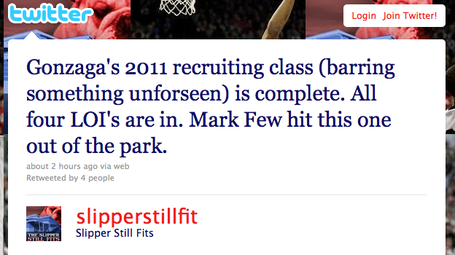 Zach Bell of the Slipper Still Fits provides a breakdown.

Gonzaga expected to ink major 2011 class on Wednesday - The Slipper Still Fits
Mark Few has been building momentum with this class since nearly a year ago when he snagged the verbal commitment of Kyle Dranginis, an under the radar guard from Idaho. Few and the staff continued their momentum all the way through last month when they seemingly capped off the class with Kevin Pangos, a pure point guard with big expectations from Canada.

While Gonzaga's class is loaded with talent, the guy that has created the most buzz is Gary Bell Jr. Bell, aside from being an elite guard prospect with numerous BCS offers, chose Gonzaga over a number of Pac-10 suitors.

Head over to the Slipper Still Fits for continued updates and insights on Gonzaga's recruiting class.