Highlights And Reaction From Frisco, TX: The Eastern Washington Eagles Are National Champions

Share All sharing options for: Highlights And Reaction From Frisco, TX: The Eastern Washington Eagles Are National Champions

The Eagles started the year the butt of college football's jokes. People couldn't understand their red turf and laughed at them because of it. Now, the tables have turned. The Eastern Washington Eagles are the one laughing as they take the national championship back to Cheney, WA.

If you missed the game, or just want to relive the magical comeback, ESPN has all of the highlights you crave

After the game, Eastern Washington players were, understandably, very excited. Bo Levi Mitchell, who ended the game with three touchdown throws in 20 minutes and 302 yards, grew up in Texas and started his college career at SMU. During a post game interview, transcribed by Travis L. Brown from ESPN Dallas, he was very thankful to those who gave him his start:

"Thank you for everyone who got me here and taught me how to do what I do," Mitchell said. "To Coach Jones and Coach Joseph...they got me to where I am right now."

He was also very thankful of his teammates around him:

"In the second half, the receivers just turned it up. They did everything they’ve been doing all year and that’s making plays. My balls weren’t perfect. They weren’t. They made plays and do what they had to do and we won the game because of them."

EWU coach Beau Baldwin also gave credit to the offense, specifically Mitchell and the wide receivers, in this interview provided by the Associated Press:

"We started to go up-tempo," coach Beau Baldwin said. "We wanted to play as fast as we could on offense. We felt like that was going to give us the best chance. We took it to a speed where that would give us a little bit of an edge. It allowed Bo and the receivers to get into a rhythm."

Meanwhile, in the portion I know that you all have been waiting for, politicians were reacting to the news of the national championship. As seen earlier is this story stream, Joe Biden, who appeared in the ESPN broadcast booth to boast about his Delaware Alma Matter, was none too pleased with the fourth quarter permanence of his Blue Hens: 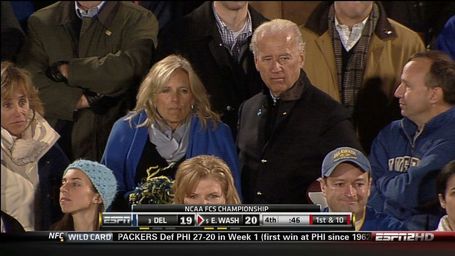 While Biden was sulking, Washington governor Chris Gregoire was busy planning a dinner with food she gained in a bet with Delaware governor Jack Markell. 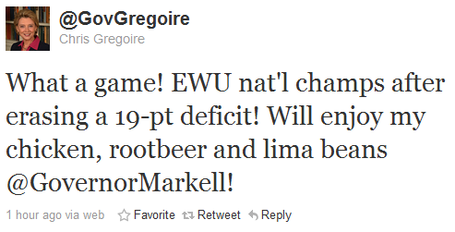 For the record, had the Blue Hens held on to that 19 point lead, Governor Gregoire would have had to send Washington steak, potatoes, and Walla Walla Wine to Delaware.