As a nice display before tonight's FCS Championship game, skydivers dressed in both Eastern Washington and Delaware colors were to parachute into the stadium with flags tied to their body. The Eastern Washington skydiver, with American flag in tow, looked great soaring through the air. One problem ... he missed the target. Not only did he miss the target, he apparently missed the entire stadium. I mean, it is a small target and all, but you've gotta be better than that.

Here's a picture of the skydiver from SWXRightNow on Twitter. 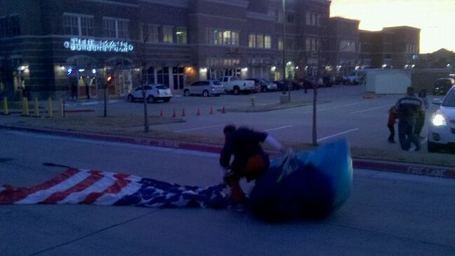 Woops. Close, but not quite, champ. Not exactly the best start, or a good omen, for the Eagles. The Delaware-dressed skydiver, on the other hand, did stick the dismount, landing in the stadium just fine. One of two ain't bad, at least.

The 2011 FCS Championship Game kicks off at 4 p.m. on ESPN2. Follow our StoryStream for all the action from Frisco, Texas as Eastern Washington battles Delaware.