Share All sharing options for: Washington Huskies Fanbase prepares for Blackout against Stanford

The Washington Huskies are promoting Thursday night's game against Stanford as the "Blackout Of The Century." Set to take place at Washington's temporary home at CenturyLink Field, this will be the Huskies' first game of 2012 wearing black uniforms.

World-class photographer Olugbenro Ogunsemore was brought on by Washington's athletic department to snap a promotional photo (picture below) for the Blackout. 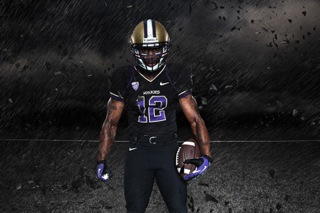 Here's a behind the scenes video of the photo shoot courtesy of GoHuskies.com:

Fans are advised to arrive early to Thursday night's game, Starbucks is providing the first 25,000 fans with black gloves, Boeing Employee Credit Union is giving away black beanies to the first 11,000 fans and black sunglasses will be given to UW's student section courtesy of Coca-Cola.

Lastly, a pre-game rally is set for 3:30 p.m. PT at Hing Hay Park in Seattle's International District. Pre-game entertainment will be provided at the park until 5:00 p.m. PT when a march to the stadium will commence.