De'Anthony Thomas is having quite the year for the Oregon Ducks. Many around the nation believe he is the fastest man in college football, and hopes for a Heisman Trophy remain high in Eugene.

As the Ducks begin Pac-12 play this weekend, Thomas will take the field knowing he has accomplished something very few college athletes have done: appear on the front cover of a Sports Illustrated issue.

Here is what SI's cover looks like this week: 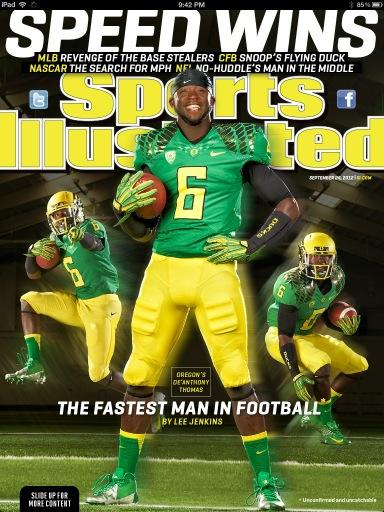 If you subscribe to their digital edition of the magazine, the cover is an animated one.

Through three games this season, Thomas has 13 rushing attempts for 228 yards and four touchdowns. He has 11 receptions for 154 yards and three more scores. DAT also has seven punt returns for 93 yards. Oregon has used him sparingly against their weak out-of-conference schedule, although that will likely change this weekend as the No. 22 Arizona Wildcats come to town.

For more on Ducks football, be sure to check out Addicted To Quack.