The Oregon Ducks have new uniforms. How surprised are you? Not at all, probably. The Ducks seem to turn out new uniforms every year.

Darren Rovell had this tweet about Oregon's new designs:

Oregon has released a more expansive set of their photos on Facebook, some of which you can view after the jump.

In terms of overall fashion, there are yellow jerseys and yellow pants, as well as white helmets and white jerseys in another shot. The Nike Pro Combat line seems to be in full effect here, to get the best possible uniforms available.

These new uniforms by the Ducks are all about getting lighter and more flexible, which will help Oregon increase the overall speed in their units.

This seems to be one of the more comprehensive designs regarding Oregon uniforms this season. 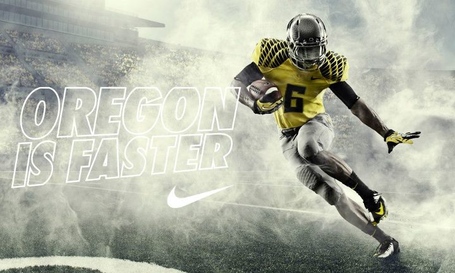 Oregon will definitely be right back in the talk for having some of the best uniforms in college football this year.

Talk about Oregon football by heading on over to Addicted to Quack. Hit up the SB Nation college football hub for more comprehensive NCAA football coverage.